Netball Superleague: How Wasps and Severn Stars came into existence 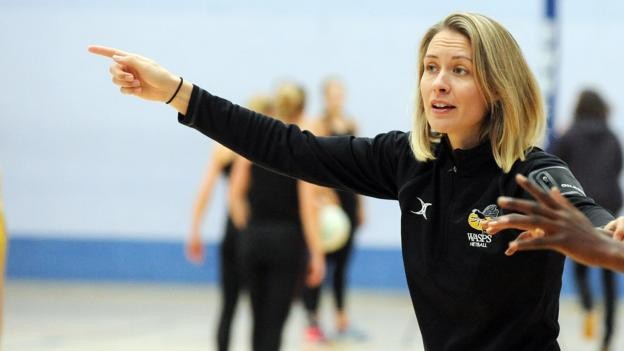 Mix a legend of the game with lofty ambitions, throw in a dollop of endless hard work and add a pinch of star power, and voila – a new Superleague netball club is formed.

But, while their job titles are the same, their circumstances, approach and recipes for success are somewhat different.

Greenway left Surrey Storm after coaching them to a second-successive Grand Final triumph and moved to Coventry to join the Wasps family – or brand, depending on which way you look at it – as one of the country’s top rugby union clubs decided to expand into netball.

Cookey, the former England captain who played in Greenway’s Grand Final-winning Storm side, retired as a player only for her business career to unexpectedly return her to the sport within months as director of netball at Severn Stars – a club formed as a collaboration between the University of Worcester and University of Gloucestershire.

“It’s exciting and I do love a challenge,” Cookey, 32, told BBC Sport.

“I want to put my mark on something. And this is something new, something I could bring my ideas to.”

The task? To help build an elite squad of 12 players, establish three development sides, build community support, a fan base and club identity from scratch in six months.

From repeat glory to ‘dream job’

Sat in her first meeting with Wasps powerbrokers, Greenway admits she completely failed to “play it cool” as figures around the table discussed their plans to throw their Premiership-rugby-sized resources – including an exhibition centre – behind one of the Superleague’s new clubs.

“I couldn’t contain myself and think I said, ‘oh my God, this is my dream job’,” said 34-year-old Greenway.

“When I was sat there and they were telling me all these ideas of what they wanted to do, that is what I was thinking – this is what I’ve worked towards for 10 or 12 years and I can’t believe I’m sat here.”

Greenway, capped 67 times by England between 2004 and 2015, left Surrey after seven years to join Wasps, who identified her as the cornerstone figure of their audacious expansion project.

“She was one of the most talented players to play for England, but she’s also got the business brain and sporting brain to go with it,” said Wasps group chief executive David Armstrong.

“The world is her oyster in terms of netball. As the sport grows in popularity and in participation she is bound to be at the forefront of it, so recruiting her as director of netball was probably my best decision of the year.

“As a newcomer into the sport, the most important decision was always going to be the recruitment of director of netball or head coach because that is what was going to bring the idea to life and help recruit players.

“In Tamsin, we have got that.”

Likewise, the Stars made sure their first appointment would be one that resonated in the netball world.

Even before seven-time Superleague winner Cookey arrived with her 114 England caps, Severn Stars were already being moulded by a former international playing great and new head coach, Mo’onia Gerrard – a two-time World Cup winner with the Australian Diamonds.

The pair, once fierce rivals on court, are now the closest of colleagues.

“Oh, I had plenty of battles with her on court. She was a pain,” said Cookey. “It was weird, the first conversation we had, because it was like we had known each other for years.”

The Australian’s arrival was a “major coup” for the fledgling franchise, says founding director Anita Navin.

“She was a massive brand straight away that said we mean business,” said Navin.

“I’d got an idea early on in terms of what we needed to do to be seen, as I was worried that we would be a new franchise and wouldn’t be seen as a critical part of it and we wouldn’t recruit players. That became a big issue early on, plenty of sleepless nights about how you build a brand in two weeks.

“You can’t recruit players without a coach because they want to know the style of the coach.

“A lot of our athletes in this country have their own preference of style, they don’t like the real authoritarian type of coaching, they want to be empowered, have ownership, so I knew the coach was a real critical appointment for us.

“And it couldn’t just be someone that has a tiny element of experience at international level, we needed to get someone that had been there and lived it.”

When Cookey walked off the Copper Box court after helping Surrey Storm defend their title in May 2016, did she expect to start retirement as a senior lecturer at the University of Gloucester and director of netball at the then, yet-to-be identified new franchise? No.

“It came at the right time,” said Cookey, a figure that Navin had long tried to get involved with the game in Gloucestershire.

“I wasn’t thinking about any netball jobs at all when I retired. It wasn’t on the radar.

“This is a nice opportunity to stay in the sport and I could create something with netball and could develop my career on the other side.”

While Severn Stars might lack Wasps’ established professional sporting pedigree, they have the pooled resources of two universities.

They will play at the 2,000-seater Worcester Arena, calling on the netball nous of Navin – one of the country’s foremost coaching advisors – while utilising communication, marketing, strength and conditioning, performance analysis and sports therapy expertise at the schools.

‘I’m never one to do things by half’

As an athlete, Cookey was used to being busy as she effectively lived a double life, juggling an international playing career and club ambitions with business management jobs, which at a time also included commutes from Bristol to France.

Unlike Greenway’s post at Wasps, Cookey is less focused on what happens on court as she only contributes as a specialist coach, with former Hertfordshire Mavericks head coach Sam Bird coming in as assistant coach.

Cookey’s job is one that ranges from ensuring the complex partnership between the two universities works to helping sign players, establishing links with grassroots netball clubs, generating corporate support, working on events and helping to make sure that everything adheres to Superleague regulations.

She has even had an influence on the creation of Twitter accounts and merchandise.

Asked if she could have chosen a tougher job in netball after retiring from the game, she laughed: “Probably not. I tend to do that to myself, I’m never one to do things by half.

“This job brings together my talents. It’s the right fit for me. I can still be in netball but not be playing or coaching.”

With franchise bids won and bosses in place, both Wasps and Stars mounted bold recruitment drives.

Last season’s top scorer Rachel Dunn is among several Surrey players to follow their boss to the Ricoh Arena, while fellow England international Natalie Haythornthwaite moved to Wasps from Manchester and South Africa captain Bongiwe Msomi returns to the English league to reunite with Greenway.

“It was nice to get my dream team and honestly this is the pick of who I wanted,” said Greenway.

“I took a lot of stick for bringing so many players in from different clubs, but I’ve had relationships with these players, we have worked together a long time.

“We brought in big names, we knew we had to get people talking. I think we have become a target, of course we have.

“I had to work hard to convince some of them. There are some unknowns, we’ve still got George Fisher to make her mark, Fran Williams, Lucy Harris, Lucy Parize – these are important players because this is not about a one hit wonder, it’s a building process.”

From the sleepless nights thinking about how to approach and convince players to suit up for the Stars, the club has gone from zero to 100 players – across four teams and development squads and training partners – wearing the Severn colours in six months.

Jodie Gibson was the first player to sign and she was one of three England internationals to leave last season’s losing finalists Manchester Thunder to join the new franchise.

“We needed quick wins before we could market who we were,” said Navin. “We wanted the right people to share the identity, and that is the conversation we had with those three.”

From there, the squad was built, taking in emerging England talent and those with Superleague experience, before looking at players in local trials.

“It feels like the jigsaw has come into place,” she said.