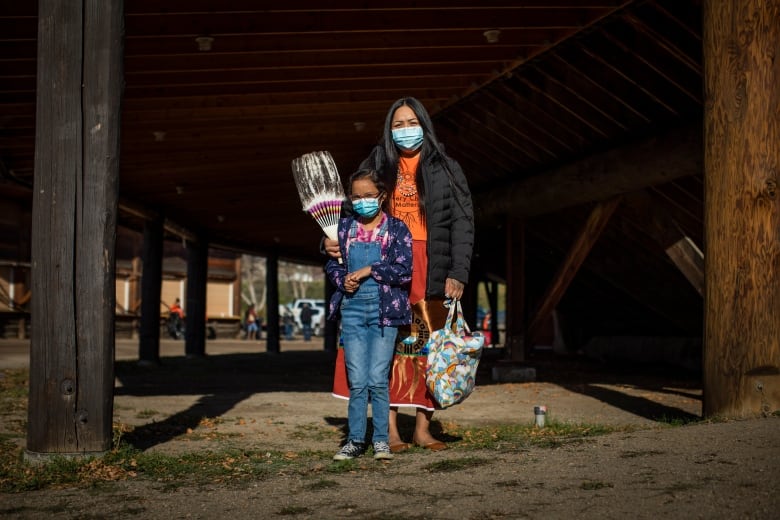 As Ashley Michel approached the microphone Monday afternoon in the powwow arbour of the Tk’emlúps te Secwe̓pemc Nation, she paused and fought back tears.

“Mr. Trudeau, there is a lot I want to say, but you don’t know me,” she said, reading from prepared notes. “My voice may shake a little … but I need you to listen and I want you to hear my voice.”

Michel, who stood beside her seven-year-old daughter, Aveah, shared the pain she felt for mothers who lost their children at the nearby Kamloops Indian Residential School, where unmarked graves were discovered this spring, and denounced the destructive legacy of assimilation.

“I am mourning for our language, culture, traditions that I’m so desperately trying to reclaim and teach my daughter before it’s too late,” she said.

The event was a reckoning for the prime minister, who apologized repeatedly Monday for snubbing an invite from the Tk’emlúps te Secwe̓pemc to join the community on the first National Day for Truth and Reconciliation in September.

Trudeau faced especially sharp words from Kukpi7 (Chief) Rosanne Casimir, who recounted the “shock, anger, sorrow and disbelief” felt by the community when it learned that he had instead vacationed with his family that day in Tofino, B.C.

The event was also meant for Trudeau to make amends with the First Nation and beyond. In closing remarks, he singled out Michel by name.

“That was unexpected,” she said in an interview after the ceremony. “I appreciate it and it made me feel heard. But only actions will tell me if he was really listening.”

That cautious optimism was echoed by a number of attendees.

Leona Hammerton, a 66-year-old member of the Adams Lake Indian Band in Chase, B.C., attended a private community meeting with Trudeau earlier that morning, where he spoke one-on-one to members and visited the unmarked burial site.

“But I also heard promises,” she said. “As a Native person, I don’t see a lot of promises coming true in my life.”

Hammerton said she also felt the prime minister should have been joined by his wife, Sophie Grégoire-Trudeau. Instead, he was accompanied by a swarm of security detail and staff, who, along with the media, at times appeared to outnumber the dozens of attendees spaced out in the bleachers.

Steve Basil of the Bonaparte First Nation said the level of security was unnecessary.

“We police ourselves in a respectful way, in an honourable way,” said Basil, 67. “There has never been any harm come to any dignitary that has come to our territory.”

Basil noted that while there was anger in the community, many opted to stay away from the event to minimize crowds during the pandemic.

That sparseness also allowed for moments of quiet grief. As Trudeau delivered remarks, two young women seated on a grass field consoled an elder who wept.

Intertwined with the frustration and optimism was a desire to forgive. Kim Coltman, a 61-year-old Kamloops resident who is Métis, said she was grateful for Trudeau’s apology, which she hadn’t expected.

“I think that moving forward, if we don’t accept that apology, then we’re not going to move forward. We’re going to get stuck right where we are,” she said.

Coltman, who runs a Kamloops-based fashion agency and has spent decades trying to bring attention to unmarked burial sites, said she hoped Trudeau’s appearance would amount to more concrete action.

Casimir laid out the Tk’emlúps te Secwe̓pemc Nation’s demands in her meeting with Trudeau. She called for federal funding of a new healing centre in Kamloops for survivors of the residential school, assistance to further survey unmarked burial sites and full access to student attendance records from residential schools.

While Trudeau did not promise new funding, Casimir said having him speak directly to the community was crucial to healing the relationship.

“We all have to own our mistakes,” she said following the ceremony. “It’s up to us as individuals to make steps to rectify them. And I think that was a really good step today.”