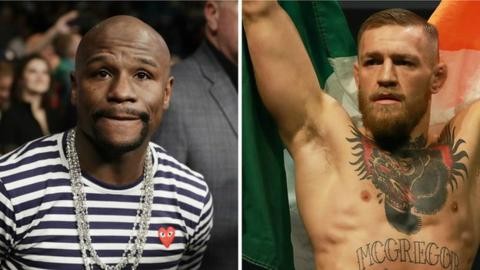 Floyd Mayweather has denied reports he has already agreed a bout with Conor McGregor, but called on the UFC champion to “get the fight done”.

In a Twitter post, Mayweather wrote: “There haven’t been any deals between myself and any other fighters.

“If any changes are to come, I will be the first to let the world know.”

In reply, McGregor posted a photo of himself sitting on a throne with the caption: “I am in Las Vegas. Floyd has retired on my arrival.”

And later Mayweather added: “Listen Conor McGregor, if you really want to get this fight done… take care of your business with the UFC and have your people get in touch with my people.”

Mayweather, 39, retired from boxing for a second time in September 2015 after defending his WBC and WBA welterweight titles with a 49th win from his 49th fight, a victory that equalled Rocky Marciano’s career record of 49-0.

The American, widely considered to be the best fighter of his generation, also retired in 2008 after 39 fights. In January he told ESPN he had offered McGregor $15m (£12m) to face him in the ring.

McGregor, 28, has never fought a professional boxing match and has said he wants $100m (£80m) to fight Mayweather.

The Irishman became the UFC’s first dual-division champion in November and has previously challenged Mayweather to a fight under mixed martial arts rules.

His boxing licence was granted by the California State Athletic Commission in December, allowing him to box in the US state.

However, he is under contract with the UFC and any potential fight with Mayweather would require approval from the body.

UFC president Dana White has said he would pay each fighter $25m (£20m), but on Tuesday he told the Los Angeles Times: “No deal is even close to being done.”

Speaking in February of last year, Mayweather said he had been offered “crazy numbers”, “nine-figure” sums to fight again.

“If I do get the itch to come back, it really won’t be for the money but I have to get paid. That’s why the nickname is Floyd ‘Money’ Mayweather,” he added.