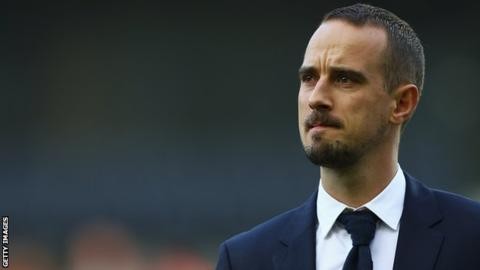 An anti-racism campaigner says “bigger questions” must be answered by the Football Association after England striker Eni Aluko alleged head coach Mark Sampson made comments with “racial connotations” to a team-mate.

Sampson allegedly asked a mixed race player if she had been arrested.

He was cleared of any wrongdoing by an FA-appointed independent panel.

But Piara Powar of Football Against Racism in Europe said the way Aluko’s complaint was handled troubled him.

“The FA has done the right thing in commissioning an independent investigation. However, the more revelations that emerge publicly the bigger the questions become,” he added.

“As I see it Eniola Aluko is a leader and an individual of principle. She did the correct thing in raising her concerns. One of the questions I have is why a player raising legitimate issues has found her England career effectively ended and her voice gagged.”

Sampson is accused of making the alleged comments in 2015. Aluko, who has 102 England caps, included the allegations in her case against Sampson, which was sent to the FA last year.

Since making the complaint, Chelsea forward Aluko has not been picked for England and last played for her country in April 2016 despite being the Women’s Super League One top scorer the same year.

However, she still remains a centrally contracted player, on a deal worth about £30,000 a year.

Details of her complaint were leaked on 7 August about the bullying and harassment case but they did not include the alleged remarks made to the player, which Aluko claimed had “derogatory, racial and prejudicial connotations”.

The alleged comments are understood to have made the player to whom they were directed feel “shocked” and extremely uncomfortable.

‘Haven’t you been arrested before?’

It was also revealed last week that Aluko received about £80,000 in a settlement with the FA, but the governing body said the 30-year-old was not “precluded from speaking about the facts of that complaint”.

It said it had agreed “a mutual resolution” with her to avoid disrupting the England squad’s preparations for Euro 2017, which ended in a semi-final defeat by the Netherlands earlier this month.

Aluko, who is also a lawyer, responded in a statement to confirm that she “raised a grievance against the FA as a result of treatment that I and others previously suffered”.

In her original evidence submitted to the FA, Aluko said: “During a meeting, at which I was not present, MS [Sampson] used an analogy about pressing hard in midfield and getting a caution like a police caution.

“MS then addressed the player individually and said in relation to being cautioned by police: ‘Haven’t you been arrested before? Four times isn’t it?'”

Aluko’s evidence continued: “This comment about the player was made with derogatory, racial and prejudicial connotations.

“It was also a defamatory, untrue statement given that the player has never been arrested and MS’s comment indicates an assumption (subconscious or conscious) that being mixed race from London suggests a criminal record with the police.

“Although I was not present at the meeting, other players confirmed MS made this comment and that it was not received as a joke and created an awkward atmosphere in the room.

“I was deeply concerned and felt it was highly inappropriate for the national team coach to make such a sweeping negative generalisation about a new player in the team.”

Referring the alleged incident to her own bullying and harassment case, she added: “As a black female in the team, understanding the unfavourable, racial and social connotations underlying MS’s comment further heightened my feelings of fear and isolation, especially in light of the previous instances where I have been negatively singled out, too.”

In a statement, the FA said: “Following an internal review into allegations raised by Eniola Aluko last year, The FA commissioned an independent investigation conducted by a barrister, Katharine Newton, who is an expert on employment and discrimination law.

“The detailed independent investigation report did not uphold any of Eniola Aluko’s complaints and found no wrong-doing on behalf of The FA or others.”