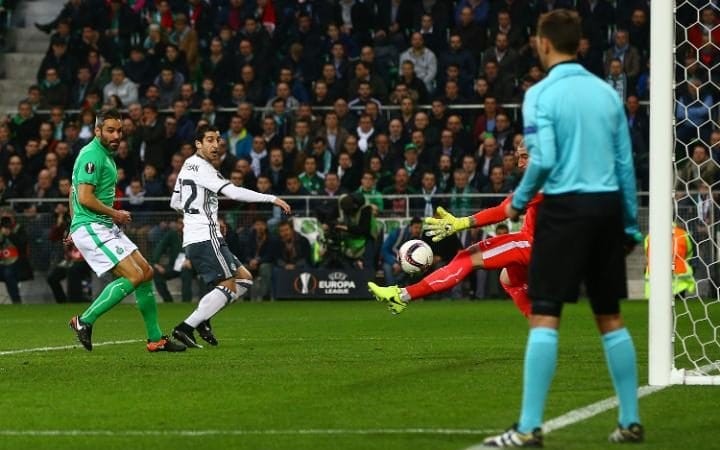 Manchester United eased into the last 16 of the Europa League with victory at Saint-Etienne but goalscorer Henrikh Mkhitaryan could be out of Sunday’s EFL Cup final after limping off.

Leading 3-0 from the first leg thanks to a Zlatan Ibrahimovic hat-trick, United started sharply in front of a noisy home support at a stadium often referred to as ‘The Cauldron’, with Mkhitaryan flicking in Juan Mata’s cross early on to leave the hosts needing five goals.

The Armenian departed shortly after and clutched his hamstring as he entered the tunnel, an injury which could impact on manager Jose Mourinho’s team selection for Sunday’s Wembley meeting with Southampton.

And although United had defender Eric Bailly sent off for two bookable offences in the second half, they rarely looked under pressure in securing a place in Friday’s last-16 draw.

Short of a Loic Perrin header, which was easily held by Sergio Romero in the first half, United – who had made six changes – were comfortable throughout, with Marcus Rashford poking wide when well placed in the second period.

The first leg of their next game in the competition will arrive days before an FA Cup tie at Chelsea but with just one defeat in 25 matches, Mourinho continues to shuffle his pack efficiently and the challenge for three cup successes remains in tact.

From dream to nightmare

United’s brilliant run of form since early November has largely coincided with Mkhitaryan establishing himself as a first-team regular.

His sixth goal for the club was a deft flick at the near post as he guided the ball low into the net, effectively ending the contest.

His inclusion, along with that of Ibrahimovic and Paul Pogba, perhaps suggested Mourinho felt United still had work to do in the tie, despite the prospect of a first major trophy of the Portuguese manager’s reign being on offer on Sunday.

But Mourinho believes his playmaker will have “too little time” to overcome the injury and Michael Carrick also looks a doubt with a calf complaint.

The injuries will pose selection dilemmas but could pave the way for Wayne Rooney – whose future at the club looks uncertain – to perhaps figure more prominently at Wembley.

If Mkhitaryan’s injury frustrated Mourinho, he was visibly angered as he waved his hand up in protest when by Bailly was dismissed for two yellow cards in a 185-second spell.

Bailly was fractionally late on Romain Hamouma to bring about his second caution, though Mourinho felt the winger “enjoyed too much the diving and simulation”.

The defender will miss the first-leg of the next round, but his dismissal should not take any gloss from a professional display. When resistance was needed, it arrived – notably when Bailly and Romero raced to thwart Kevin Monnet-Paquet’s burst towards goal in the first half.

At the other end, the pace of Rashford, drive of Pogba and threat of Ibrahimovic ensured United always looked capable carving their hosts open and finding extra gears if needed.

Almost nine years have passed since their last European success under then-manager Sir Alex Ferguson, who watched from the stands as United made it five wins in a row, with just one goal conceded.

Tough opposition such as Lyon and Roma could yet arise in the Europa League but United clearly look well placed for an assault on a trophy they have never won and though injuries mount, they carry strong momentum into the first domestic cup final of the season.

Man of the match – Paul Pogba

“The right message” – what the managers said

Manchester United manager Jose Mourinho: “Everything was under control, solid, focused, professional. Obviously the first goal kills every hope. We still like to win the game. I told the players if someone gives me a 2-1 victory it is not enough. I always want the best possible result.

“I have to give the right message to the players and the right message is to play with a strong team and have a bench with options. We knew it would be difficult. It was important to play solid and to have complete control of the game.”

Saint-Etienne manager Christophe Galtier: “I would love for my players to have won this game for themselves, first of all, but also for the fans because they would have deserved it. The fans were just exceptional tonight.”