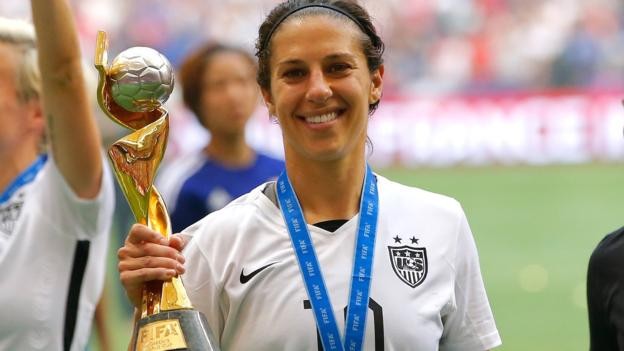 The United States midfielder, 34, has scored 96 goals in 232 international appearances, including a 13-minute hat-trick in the 2015 World Cup final.

She joins the Women’s Super League One club for the 2017 Spring Series, which begins in April and ends on 3 June.

US captain Lloyd becomes the third American player to move to an English club this winter, after winger Crystal Dunn’s move to Chelsea Ladies and midfielder Heather O’Reilly’s switch to Arsenal.

“This facility [at Manchester City] is unbelievable. I don’t think anything compares to it,” Lloyd told BBC Sport. “I am always looking to improve my game.

“It is another challenge for me, to be able to come over here, train with some of the world’s best players, be at the world’s best facility, playing in the Champions League and hopefully win an FA Cup and the Spring Series.

“I’ve had a lot of different offers from various clubs and none of them really panned out, but this one was going in the right direction.”

On joining the WSL, Lloyd – who most recently played for American side Houston Dash after a spell with Western New York Flash – added: “It is definitely the next up-and-coming league.

“It is going to be fun to be able to play a few months with some of these players and get a better understanding of how this league operates. I can help promote the [American] NWSL and help see how they run things here and make our league back home a bit better as well.”

Lloyd also stated her ambition to help City win the Women’s Champions League this season, a competition that no English side has won since it was rebranded from the Uefa Cup in 2009.

“Not too many people get to say they have taken part in the Champions League,” she continued. “It is huge.

“I have experienced a lot; World Cups, Olympics and being at the Fifa World Player of the Year Awards. A Champions League win would totally top that off.

“That’s what I’m going after. That’s the next challenge set in front of me. I’m just looking to get after it and do anything I can to help.”

The final of this season’s Women’s Champions League takes in place in Cardiff on Thursday, 1 June.

City would face either defending champions Lyon or last year’s runners-up Wolfsburg in April’s semi-finals if they overcome Fortuna Hjorring in the last eight.