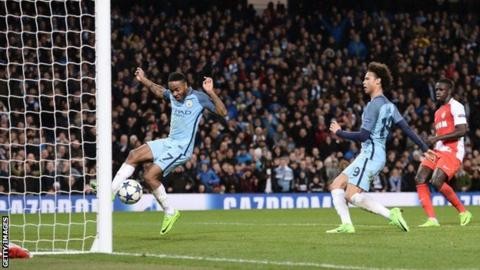 Manchester City came from behind twice to secure a crucial two-goal advantage after a classic Champions League last-16 tie against Monaco at Etihad Stadium.

On a night of fluctuating fortunes and thrilling football, Pep Guardiola’s side were on the precipice in this tournament before dragging themselves back to ensure they go into the return in Monaco with a priceless lead.

Colombian Falcao, back to his best after failed loan spells at Manchester United and Chelsea, then lifted a brilliant chip over Caballero to put Monaco back in front – but this was the signal for City to launch an enthralling attacking salvo.

Aguero – who felt he was denied a first-half penalty after he tumbled under a challenge from Subasic – volleyed in another equaliser before John Stones made amends for poor defending in the build-up to Falcao’s second by putting City ahead on the night with a sliding finish at the far post after 77 minutes.

Man of the match Sane handed City that two-goal cushion with a simple tap-in from Aguero’s pass eight minutes from time – but Monaco’s vibrant attacking ambition means this tie is far from over.

Aguero’s Manchester City future has been the subject of debate with recent arrival Gabriel Jesus appearing to find greater favour with manager Guardiola – but how can they seriously consider life without this world-class striker?

City may have been rattling at the back but Aguero was in magnificent form throughout, terrorising Monaco with his prodigious work-rate and sheer menace.

Aguero was denied a penalty in the first half when he was booked for diving after he was upended by Monaco keeper Subasic but he was not to be denied and was a key component of City’s enthralling fightback.

He enjoyed some deserved good fortune when his shot went straight through Subasic for his first goal but he delivered a sumptuous right-foot volley to make it 3-3 and then set up Sane for the crucial fifth goal that gave City that two-goal advantage.

Aguero was substituted to a standing ovation and a kiss on top of the head from his manager with four minutes left – this was the night he delivered proof, as if it were needed, that he is the man City and Guardiola cannot do without.

Falcao looked a lost soul in two seasons on loan from Monaco to Manchester United and Chelsea – but this was a master striker back to his best.

The Colombian marred his display with a horribly hesitant penalty that was saved by Caballero and would have put Monaco 3-1 up, but there was so much about his and the visitors’ display to admire.

Falcao looked nothing like the demoralised figure who made 26 league appearances for United, scoring only four goals, and who got one goal in 10 league games for Chelsea.

He pounced like the poacher supreme to head his first but his second was a work of the striker’s art, dismissing Stones from his presence before having the composure and class to deliver a lofted finish that left Caballero helpless.

And in those moments, he and Monaco delivered the message to Manchester City that this tie is not over. Monaco looked a side packed with threat and goals and they will still feel they can claw this back.

Mbappe has the sleek elegance of a young Thierry Henry while Bernardo Silva is a player of the highest quality. Monaco still represent a danger.

Manchester City deservedly celebrated at the final whistle, the moment of triumph after a demonstration of resilience and attacking verve that brought a memorable win.

Guardiola, however, will not be fooled – and his agitated body language was a giveaway when it came to their defensive frailties.

Caballero helped Monaco equalise with poor distribution and Mbappe’s second was the result of routine long ball. Stones was too weak in the physical exchanges with Falcao for Monaco’s third.

And throughout, Nicolas Otamendi cut a nervous, uncertain figure whose weaknesses were probed relentlessly by Monaco.

Manchester City are in the driving seat – but they will need to make sure the back doors are firmly locked in the return leg in Monaco.

Manchester City manager Pep Guardiola: “I am so happy for the result, we are still alive. These kind of things help this club to achieve another step. We attacked in small spaces. That’s why they wanted me to come here, Everybody has to be congratulated.

“We are going to fly to Monaco to score as many goals as possible. If we don’t score in Monaco we will be eliminated.”

Monaco boss Leonardo Jardim: “It was perhaps one of the most exciting games of this year’s Champions League. A great game of football.

“The key to the game was the missed penalty to make it 3-1 but there’s 90 minutes with us. Nothing is finished.”

Manchester City are not in action this weekend because Manchester United’s involvement in the League Cup final has led to the Manchester derby being postponed, so the Blues’ next game is an FA Cup fifth-round replay with Huddersfield at the Etihad Stadium on Wednesday, 1 March.

Monaco, meanwhile, travel to Guingamp on Saturday looking strengthen their place at the top of Ligue 1.