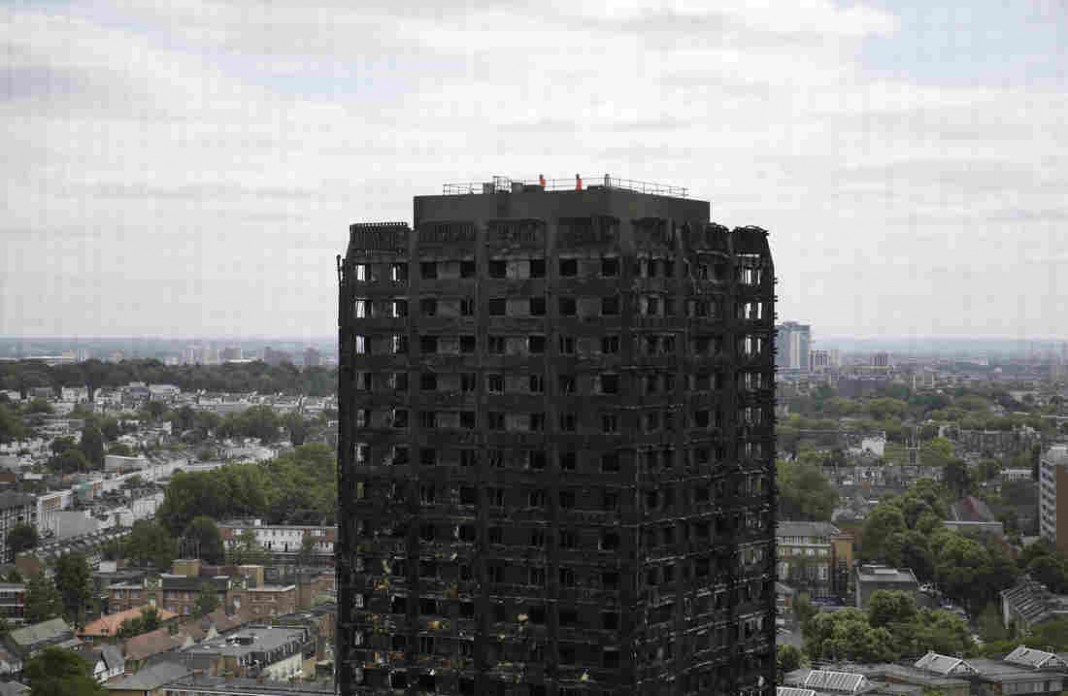 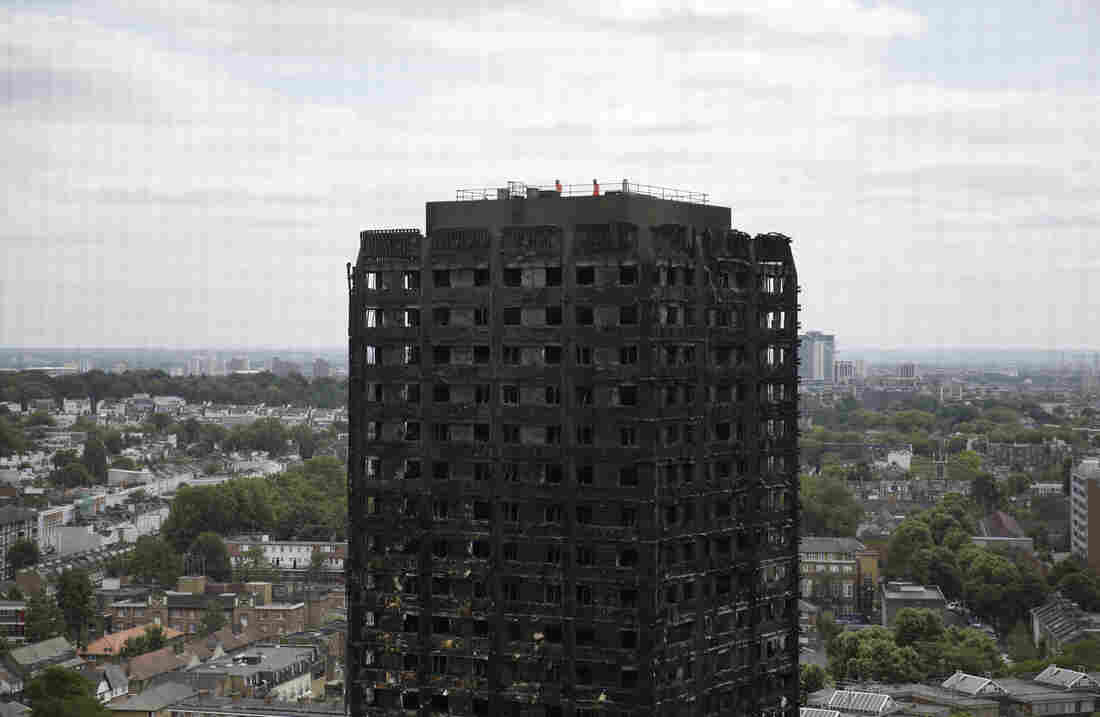 Emergency workers walk on the roof of the fire-gutted Grenfell Tower in London on Friday. Matt Dunham/AP hide caption

Emergency workers walk on the roof of the fire-gutted Grenfell Tower in London on Friday.

British authorities are launching a criminal investigation into the London apartment building fire — as the death toll from the blaze has nearly doubled, to 30.

The death toll is expected to rise further as rescue workers continue to search for victims – an operation that Metropolitan Police Commander Stuart Cundy described as “extremely challenging.”

The upper floors of Grenfell Tower sustained significant damage, he says, and “the sad reality is that this work will take some time, stretching into many, many weeks.”

Dozens are still missing. Police say 24 injured people remain at the hospital. And as NPR’s Frank Langfitt in London, police are hoping that the death toll will not reach the triple digits.

Areas near the blaze are covered in posters showing missing persons. Guardian reporter Jamie Grierson has been tweeting the posters of the missing.

The police stressed in a statement that “there is nothing to suggest the fire was started deliberately.”

But as Frank reports, questions are being raised about whether materials used in the building’s construction could have contributed to the tragedy:

“People are wondering why it seemed to burn very quickly. … Now, you look at the government documents on this building and It turns out this siding, it’s a pair of aluminum sheets sandwiched around a composite core. One version of the product [has] a polyethylene core, the other version is around a fire-retardant mineral core.

“Contractor says that he met all the fire safety standards but the questions are going to be, which kind of siding was used and what were the risks?”

Residents had raised concerns about the fire safety of the building prior to the blaze.

Frank adds that anger is rising in London about the deaths – for example, a leading tabloid was emblazoned with the headline “Arrest the Killers” while Labour MP David Lammy has said the incident amounts to “corporate manslaughter.”

Protesters gathered to call for help for the residents of the burned building, and the BBC reports that dozens of people “stormed Kensington and Chelsea Town Hall with a list of demands.”

Today, Prime Minister Theresa May announced a 5 million pound ($6.4 million) fund to help the families impacted by the fire, and The Associated Press reports that it “includes a guarantee to rehouse people as close as possible to where they previously lived.” 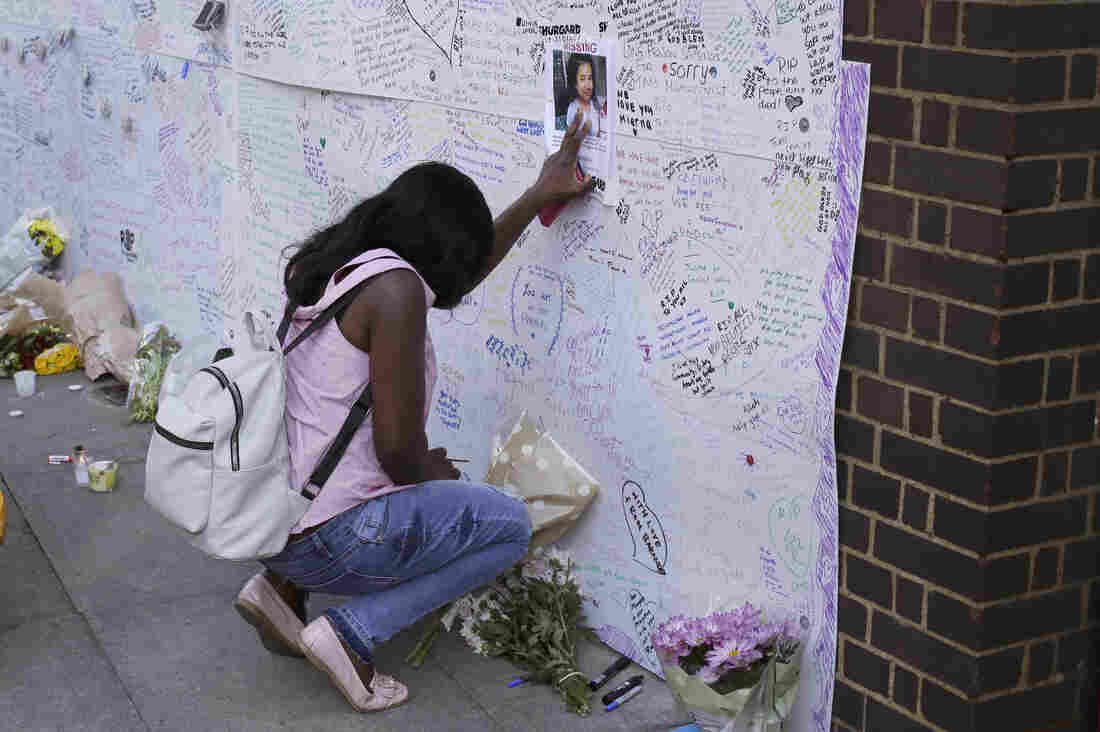 A woman touches a poster for 12-year-old Jessica Urbano on a tribute wall Friday after laying flowers on the side of a church next to the Grenfell Tower in London. Matt Dunham/AP hide caption

May has faced criticism for not meeting with survivors during her first visit to the site after the blaze, the wire service reports. Hours before the fund was announced, London’s Mayor Sadiq Khan wrote an open letter to May over the perceived lack of government response. Here’s an excerpt:

“I spent several hours yesterday talking to local residents around Grenfell Tower. These were difficult conversations with a tight-knit community that is understandably distraught, frustrated and increasingly angry. They feel the Government and local council haven’t done enough to help them in the aftermath of this horrific incident, or to provide answers to their increasingly urgent questions.”