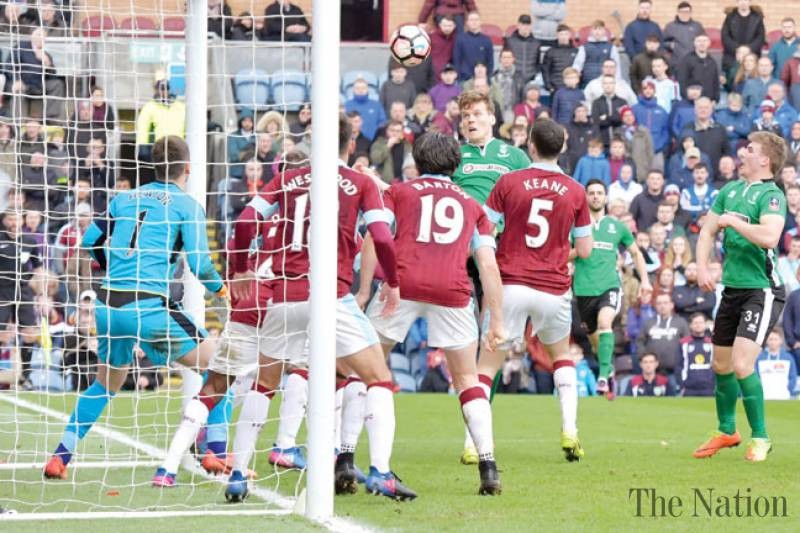 Sean Raggett scored an 89th-minute winner as non-league Lincoln City stunned Burnley 1-0 on Saturday to claim one of the biggest upsets in the history of the FA Cup.

Eighty-one places below Burnley in the English football pyramid, fifth-tier Lincoln prevailed when centre-back Raggett squeezed a header over the line following a late corner at Turf Moor.

“I’m lost for words. It’s mad. I can’t believe it!” Raggett, 23, told BT Sport. “Crazy. A non-league side in the quarter-finals, in modern football. It’s unheard of.”

They are the eighth side from below England’s four fully professional divisions to have beaten top-flight opposition since World War II and only the second to have done so since 1989.

“We said it was a one-in-a-100 chance and thankfully we got that opportunity,” said Lincoln manager Danny Cowley.

“The last eight of the FA Cup sounds pretty good. We work hard on our corners and our free-kicks and we are mightily proud of the players.”

Lincoln join Hereford United, who toppled Newcastle United in 1972, and Sutton United, conquerors of Coventry City in 1989, among the ranks of the FA Cup’s non-league giant-killers.

Sutton, also of the fifth-tier National League, will hope to pull off another upset when they host Arsenal on Monday.

Burnley manager Sean Dyche made six changes and it was quickly clear that his side were in for a scrap as Lincoln’s Nathan Arnold squared for Jack Muldoon to sweep a first-time shot over the bar.

There was an early setback for Burnley when Johann Berg Gudmundsson was forced off in the 20th minute after a foul by Alan Power, with George Boyd coming on.

Burnley were unable to convert the handful of chances they created, Lincoln goalkeeper Paul Farman saving from Andre Gray and Joey Barton, while Scott Arfield and Gray shot off-target.

Burnley’s frustrations manifested themselves in some antagonistic behaviour by renowned brawler Barton during the second half.

He escaped censure for stamping on Matt Rhead’s foot and then pretending to have been struck by the strapping Lincoln striker and was later booked for slapping Terry Hawkridge.

With a replay beckoning, Sam Habergham’s corner from the right was headed back across goal by Lincoln captain Luke Waterfall and Raggett met it with a header that Burnley goalkeeper Tom Heaton could not keep out.

“They used everything they needed to use,” Dyche told the BBC.

“You have to work, be diligent and believe you will get another chance. I think they only had one chance — credit to them. My team were nowhere near the level they can show.”

Third-tier Millwall will hope to claim a third top-tier scalp later on Saturday when they host Leicester, having already accounted for Bournemouth and Watford in this season’s competition.