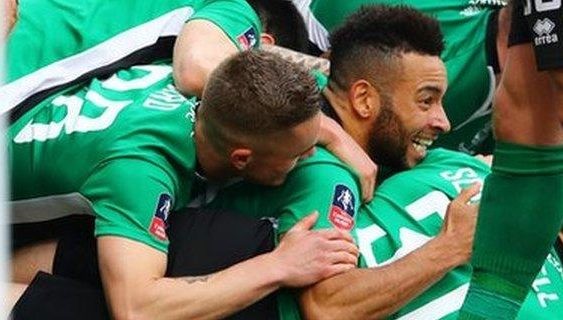 The Imps became the first non-league side in 103 years to reach the last eight with their win over the Clarets.

“Football at our level is not romantic and this moment in the limelight is special,” Imps boss Danny Cowley said.

“It was a one in 100 chance and thankfully we got that opportunity.”

It is the first time in Lincoln’s 133-year history that they have reached the quarter-finals.

“It’s a football miracle for a non-league team to be in the last eight. The boys were excellent, playing against a Premier League team,” Cowley said.

“The last eight of the FA Cup sounds pretty good. We work hard and we are mightily proud of the players.”

The quarter-final draw will take place at 18:30 GMT on Sunday and can be seen on the BBC News channel and the BBC Sport website, with commentary on BBC Radio 5 live.

How big an achievement is this?

Lincoln are the National League leaders but there are 81 places between them and Burnley in the football pyramid.

This is the first time that two non-league teams have reached the FA Cup fifth round since 1888.

Their determination and ability to frustrate Burnley ensured that Sean Raggett’s 89th-minute header saw the side become the first non-league team since Queens Park Rangers in 1914 to make the quarter-finals.

The historic victory, celebrated jubilantly by the players and travelling fans, means the Imps are the first non-league side since Telford in 1985, and only the third ever, to knock out four league clubs in a single season.

“It is a game that will go down in history. Every Lincoln player is a hero,” former Chelsea winger Pat Nevin told BBC Radio 5 live.

“Lincoln are deservedly through, not just for effort but the skill and bravery. They knew they were good enough and didn’t give up.”

Where does this upset rank?

‘We took inspiration from Lincoln’

League One side Millwall followed in Lincoln’s footsteps and added to Leicester’s woes as they consigned the Foxes to their first FA Cup defeat by a side from the third tier or lower since they were knocked out by Wycombe Wanderers in 2001.

The reigning Premier League champions, who face Sevilla in the Champions League on Wednesday, are in danger of relegation after five successive defeats left them one place and one point above the bottom three.

“When a team from League One beat the champions we say ‘why?’ and have to react as soon as possible,” Leicester manager Claudio Ranieri said. “We are better than Millwall but Millwall deserved to win.”

Millwall had already beaten Premier League sides Bournemouth and Watford on their way to the fifth round and victory secured their place in the last eight for the third time in 32 seasons.

“We took inspiration from what Lincoln have done. What they achieved today outshines us,” Millwall manager Neil Harris said.

“I thought the atmosphere was electric. The noise was phenomenal. These are special days for us.”

It was a strong day for sides facing Premier League opposition, with Huddersfield Town forcing a replay against Manchester City despite the Terriers making seven changes to their side.

City’s starting line-up included Sergio Aguero but they were forced to settle for a goalless draw.

Fellow Premier League side Middlesbrough were also pushed by League One’s Oxford United. Boro made six changes to the side that drew with Everton last time out but it took substitute Cristhian Stuani’s strike four minutes from time to ensure their place in the quarter-finals.

Chelsea had the most comfortable win, beating Championship side Wolves 2-0 with second-half goal from Pedro and Diego Costa.

In a scrappy and, at times, tense game, it was Raggett’s header that beat Tom Heaton to secure Lincoln’s place in the last eight.

The 23-year-old, who said in 2012 that he one day hoped to play against Burnley’s Joey Barton, has scored five times in 30 appearances for the Imps this season.

“It’s crazy, a non-league side in the quarter-finals in modern football, it’s unheard of,” Raggett told BT Sport.

“They’re a top quality side, drew with Chelsea last week, it’s amazing. We had massive belief, we didn’t come to draw, we came to win the game.”

“Thank god for goalline technology. We don’t have it at our level so I’m not sure the goal would have been given in the National League,” Cowley added, after seeing Raggett’s header marginally cross the line.

Lincoln frustrated Burnley throughout the game, with striker Matt Rhead and Barton often outmuscling one another as tensions grew in the final minutes.

“It is something you dream of as a kid. We went toe-to-toe with a Premier League team,” Rhead said.

“It is unbelievable. When we started back in October it was a dream. I enjoyed every minute of it. The lads have done unbelievable.”

‘We’re unfortunately part of their fairytale’

Burnley have not progressed to the sixth round of the FA Cup since 2002-03 and they were left frustrated at the final whistle.

They had the majority of possession in the first half but Raggett’s header consigned them to only their fourth home defeat in their past 30 matches at Turf Moor.

“You have to work, be diligent and believe you will get another chance – I think they only had one chance, credit to them,” Burnley manager Sean Dyche told BBC Sport.

“My team were nowhere near the level they can show. No excuses. We’re unfortunately part of their fairytale.”