Leicester complain to FA over ‘abuse at fans’ 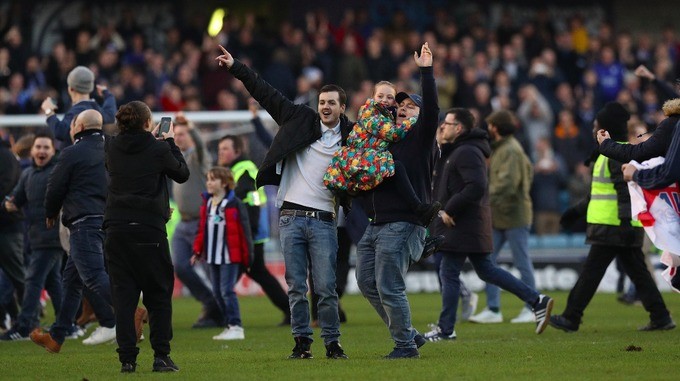 Leicester have complained to the Football Association over “abuse, provocation and intimidation” they say their fans suffered at Millwall.

The Foxes say they received “numerous complaints” and will not accept the safety of their “supporters, players, and staff being compromised”.

Lions fans ran onto The Den pitch on Saturday to celebrate the League One side’s shock 1-0 victory in the FA Cup.

Millwall said they were “disappointed” the complaint was not made on Saturday.

Mounted police were deployed after the game to keep the home fans away from the Leicester enclosure.

The FA says it intends to speak with the Premier League champions over the issue.

A Leicester City spokesman said: “We have personally congratulated Millwall on a merited victory and wish them every success in the sixth round.

“However, following receipt of numerous complaints relating to the constant abuse, provocation and intimidation of our players, staff and supporters from our arrival at the stadium, throughout the match and in its immediate aftermath, we have registered our dissatisfaction with the FA. We are awaiting their response.”

A Millwall spokesman said: “We have been made aware of these allegations today and are extremely disappointed that Leicester City, as is the professional protocol in such instances, did not raise them on the day of the game itself.

“This morning we received an email from Leicester thanking Millwall Football Club for the hospitality extended to them so are surprised that these serious allegations, which should have been discussed on the day, have come to our attention in the manner they have.”