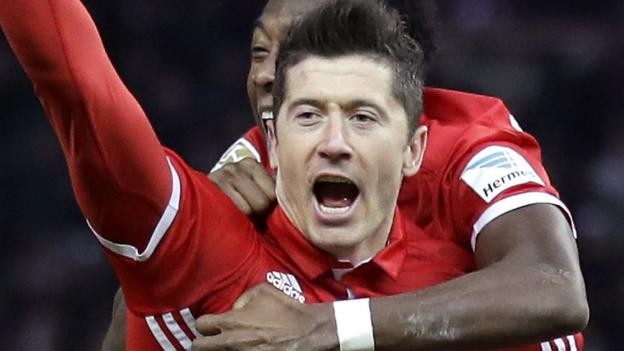 Carlo Ancelotti’s side, eight points clear at the top after this draw, have lost once in the league all season.

But they fell behind in the 21st minute as Vedad Ibisevic turned in Per Skjelbred’s free-kick.

Lewandowski, Bayern’s top scorer, came on as a substitute to prod in the equaliser amid a goalmouth scramble.

The point extends Bayern’s lead at the top as closest challengers RB Leipzig do not play until Sunday, when they visit Borussia Monchengladbach.

Eintracht Frankfurt, third at the start of play, fell to their first home defeat of the season as struggling Ingolstadt boosted their survival chances with a 2-0 win.

Romain Bregerie opened the scoring for the visitors in a game of two penalties and two red cards.

Eintracht, who had David Abraham sent off for a wild lunge on Dario Lezcano before the break, then saw Makoto Hasebe’s penalty saved. Pascal Gross made it 2-0 from the spot for Ingolstadt, who later had Mathew Leckie dismissed.

Borussia Dortmund overcame the absence of their ‘yellow wall’ to move above Eintracht into third with a comfortable 3-0 win over Wolfsburg.

The stand that houses the wall – a bank of noisy Dortmund fans – was closed for the game by Germany’s football association after crowd trouble at a game against RB Leipzig in early February.

Bottom club Darmstadt remain without an away point all season after losing 2-0 at Hoffenheim, for whom former Leicester striker Andrej Kramaric scored twice.

The match created a quirky piece of history, as Hoffenheim’s manager Julian Nagelsmann, at 29 years and 210 days old, faced a team whose average age was higher than that – the first time that has happened to any coach in a Bundesliga game.

Werder Bremen increased their chances of avoiding the drop with a 2-0 win at Mainz. They remain third from bottom, in the relegation play-off spot, but are just a point behind Hamburg, for whom Aaron Hunt missed an 88th-minute penalty in a 2-2 draw at home to Freiburg.