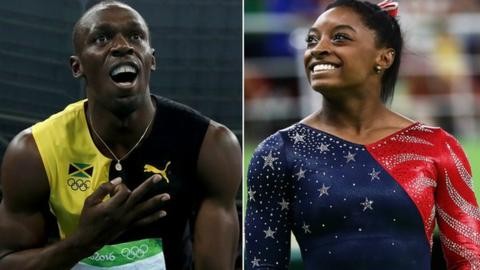 Eight-time Olympic sprint champion Bolt and four-time Olympic gold gymnast Biles were named sportsman and sportswoman of the year for their 2016 achievements.

Leicester City won the spirit of sport award for winning the Premier League.

Atherton, 29, became the first rider in history to complete a perfect downhill World Cup season and then won a fourth World Championship title a week later.

Leicester boss Claudio Ranieri and captain Wes Morgan were in Monaco to collect the spirit of sport prize, awarded after the Foxes, 5,000-1 outsiders, won the Premier League by 10 points last season.

Is this the greatest ever sporting selfie?

That took his all-time Olympic medal tally to nine but last month he was asked to hand one back after Jamaican team-mate Nesta Carter tested positive for a banned substance.

Carter was part of the Jamaican quartet that won the 4x100m in Beijing in 2008.

Biles’ four gold medals at Rio were in the team, all-around, vault and floor exercise events.

Nico Rosberg, who quit Formula 1 in December five days after being crowned world champion, received the breakthrough of the year prize.

Comeback of the year: American swimmer Michael Phelps, who won his 23rd Olympic gold in his final Games in Rio.

Sportsperson of the Year with a disability: Beatrice Vio, Italian wheelchair fencer who won gold at the 2016 Paralympics.

Sport for Good Award: for Sporting Inspiration: The Refugee Olympic Team, who competed at the Rio Olympics.

Best Sporting Moment: Barcelona Under-12 team whose players consoled their distraught Japanese opponents at the end of the Junior Soccer World Challenge in a touching show of sportsmanship.

The Laureus Sport for Good Award: Waves for Change.