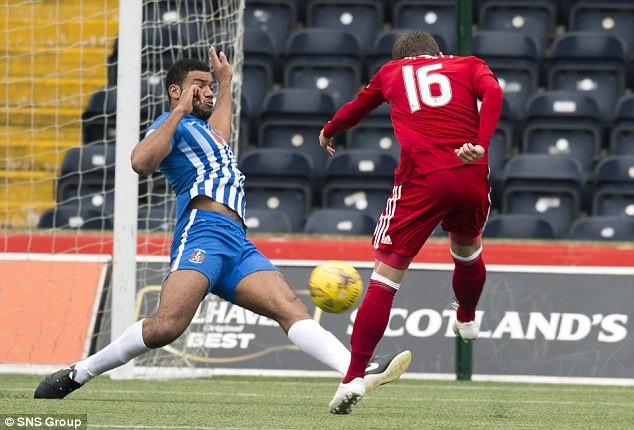 Late goals from substitutes Jayden Stockley and Peter Pawlett saw Aberdeen come from behind to snatch a 13th straight league win over Kilmarnock.

Kris Boyd might have added a second but Kenny McLean twice came close to an equaliser before Stockley struck.

Addison, who only entered the fray after 79 minutes, was again at fault for the winner as all the hosts’ diligence unravelled in the closing minutes.

Victory was a ninth in 10 Premiership matches for the Dons, who move to within 24 points of leaders Celtic, and six points clear of Rangers, who lost 2-1 at Dundee.

Kilmarnock set about frustrating Aberdeen from the off at Rugby Park, snuffing out space for the Dons in midfield.

The visitors did create chances, with McLean and Ryan Christie seeing efforts fly over before Jonny Hayes’ skill set up Niall McGinn at the far post, but his toe-poke was well saved by Killie keeper Freddie Woodman.

Christie, who had scored in his last two games since joining the Dons on loan from Celtic, wasted two further chances before the hosts deservedly went in front five minutes before half-time.

Reynolds didn’t reappear for the second half as Aberdeen boss Derek McInnes changed tactics, bringing on Graeme Shinnie at left-back with Andrew Considine moving to centre-back.

Kilmarnock might have had a chance to double their lead early in the second half, but referee Andrew Dallas waved away penalty claims from Conor Sammon, who went down following a challenge from Ash Taylor.

Veteran striker Boyd, seeking his 200th goal in Scotland’s top flight, then lashed an effort just wide on the hour.

But Aberdeen continued to threaten an equaliser, Ryan Jack heading over before McLean had a left-foot drive saved and then dragged another effort wide after escaping two Killie defenders.

Considine had to go off following a clash of heads with Sammon; McInnes threw on Stockley for the injured defender, and Pawlett for Christie, and his double change paid off handsomely.

McLean’s header into the Killie box saw Addison dally, waiting for Woodman to come off his line, allowing Stockley to divert the loose ball high into the net after 83 minutes.

Within two minutes, Addison’s poor header out of defence only reached the advancing Pawlett, who drove home the winner, aided by a deflection off Addison, as Aberdeen’s persistence paid off.

Kilmarnock will feel aggrieved by the manner of the defeat, and had a second penalty claim turned down late on when Stockley appeared to tug Addison’s shirt as they chased an equaliser.

Kilmarnock caretaker-boss Lee McCulloch: “Up to the 83rd minute, I’m proud as I can be of the boys. We had a game plan to frustrate Aberdeen, but it was just a crazy first goal [to give away].

“A lack of concentration gives them that step to come back in and they’ve shown the character of winners to go and nick another dubious goal with bad defending from ourselves.

“We’re disappointed but we need to take that form into next week. There were loads of positives – the finish for the goal, the way we passed the ball at times, the togetherness we showed.”

Aberdeen boss Derek McInnes: “Peter [Pawlett] and Jayden [Stockley] coming on really forced the issue. I don’t think we’d have won the game without the impact those boys made.

“We were not good enough in the first half, we were sloppy; I think it took losing the goal to wake us up a bit. The performances were so far removed from Wednesday night [a 7-2 win over Motherwell] when we couldn’t do anything wrong. Today it was just sloppiness.

“But we’ve found late winners a lot this season between the 80th and 90th minute. It’s an identity of the team. Whether that’s the impact of the subs or determination of the players to never know they’re beaten, it’s a good thing to have. Even though not at our best, we won the game.”