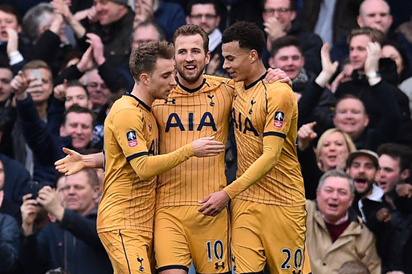 Harry Kane’s fifth hat-trick for Tottenham and second this year eased the Premier League club past second-tier Championship side Fulham 3-0 and into the FA Cup quarter-finals on Sunday.

The 23-year-old England striker, who took his tally to 19 for the season, ended a difficult week for Spurs and manager Mauricio Pochettino on a winning note following defeats by Liverpool in the league and then Belgian outfit Gent in the Europa League last 32 first leg.

Pochettino’s team selection reflected his desire for a positive result as he started with Kane, Dele Alli, Victor Wanyama and Christian Eriksen whilst bringing back Belgian central defender Jan Vertonghen for his first start since injuring an ankle last month.

“We had to recover the right feeling after two defeats,” said Pochettino.

“We had to believe in the way we work and play and that is what is important. We had lost that a little bit.”

Kane said the margin should have been bigger.

“We played very well and probably should have had a few more goals,” he said.

“I thought the manager was going to take me off soon but fortunately I was able to sneak the third one in.”

Spurs, watched by Chelsea boss Antonio Conte and former Crystal Palace manager Alan Pardew, started brightly with Eriksen — set up by a neat header on by Alli — forcing Marcus Bettinelli into a fine save in the fifth minute.

Kane slotted home the opener on the quarter hour from an excellent cross by Eriksen after Kieran Trippier had done well to spy Fulham left-back Scott Malone was out of position and found Eriksen with his throw-in.

Spurs goalkeeper Michel Vorm — who replaces number one Hugo Lloris for the FA Cup games — almost gifted Fulham an equaliser with a sloppy kick out of his area and with him out of his goal.

However, he recovered quickly enough to save Tom Cairney’s goalbound effort.

Spurs should have gone 2-0 up when Kane found Eriksen inside the penalty area but the Dane’s first touch let him down and he blasted over the bar.

Fulham had been a bit lacklustre but finished the first half on a brighter note with Stefan Johansen firing just wide and then Sone Aluko’s curling effort being safely gathered by Vorm.

However, the same combination for the opener combined again for the killer second as Trippier located Eriksen, whose superb cross was converted by Kane.

Fulham manager Slavisa Jokanovic had seen enough and sent on 16-year-old sensation Ryan Sessegnon — who had scored in both previous rounds.

Kane sealed his hat-trick in the 73rd minute by running onto a superb pass by Alli and rifling the ball past Bettinelli — the striker was then immediately removed with the second leg against Gent to come on Thursday.