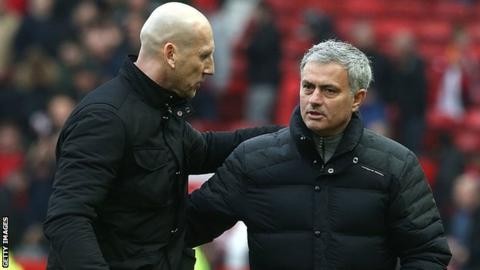 Manchester United boss Jose Mourinho says he has learned from “throwing away” FA Cup games in the past and will not make that mistake at Blackburn Rovers in the fifth round on Sunday.

United face the Championship side at Ewood Park, kick-off 16:15 GMT.

In 2005, Mourinho’s Chelsea went out to Newcastle in the same week as wins in the League Cup final over Liverpool and Champions League against Barcelona.

“I gambled too much, I focused too much on Barcelona and Liverpool,” he said.

“It was good because we beat Barcelona and we won the final against Liverpool, but the feeling I threw it away was not good, so I don’t throw it away.

“If I lose, I lose because the opponent was better or because we didn’t play well, but I’m not going to throw it away.”

The Portuguese faces a similarly busy schedule this time around, with the Europa League last-32 second leg against Saint-Etienne to come on Wednesday and the EFL Cup final against Southampton a week on Sunday.

“I’m going to Blackburn with that respect,” he added. “I go serious.

“I am going to change a few players, but am going with a good team because I respect the competition a lot and Manchester United demands that you go serious to every game.”

There have already been several upsets in this year’s competition, with Jurgen Klopp’s Liverpool the highest-placed Premier League side to get knocked out when they lost to second-tier Wolves in the fourth round.

Mourinho, who arrived at Chelsea for the first time before the 2004-05 season, says foreign managers may not understand the culture of the FA Cup like their English counterparts.

“In my case, I had immediately the first time that situation at Newcastle, so for me that was a lesson,” added the United boss, whose only success in the FA Cup came in 2006-07 during his first spell at Stamford Bridge.

“With Chelsea, we lost against a League One team [Bradford in 2015], but I never threw it away, we lost because we lost.

“Normally it is because of attitude because you think it is easy and it is not easy.

“We try to go serious. I like Wembley, I like the FA Cup, so I have to try to get the second one.”