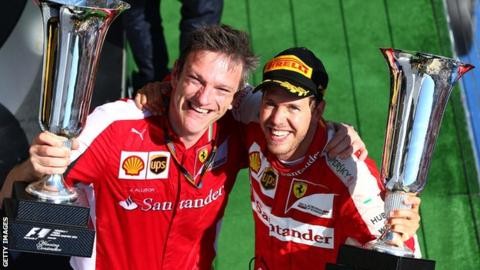 Lowe, who led the team to three consecutive drivers’ and constructors’ championship doubles from 2014 to 2016, left Mercedes in January.

Allison had two spells at Ferrari – working as chief aerodynamicist during the Michael Schumacher era of 2000-04.

The Englishman then moved to the Renault team, where he was deputy technical director when Fernando Alonso won consecutive titles in 2005 and 2006.

“It’s a massive privilege to be given the trust of a position in a team that has done so spectacularly well in the past three season.” said Allison, who was Ferrari’s technical director from 2013 to 2016.

“I am looking forward to playing my part in helping Mercedes go from strength to strength in the coming years.”

Allison will report to Mercedes team boss Toto Wolff, who added: “It wasn’t an easy task to find the right personality who can strengthen our experienced group of engineers, give our talented young team members the space to develop and also bring his own vision to this role.

“James is a sharp engineer; I think we have found the perfect guy and the right fit with our senior leaders.”