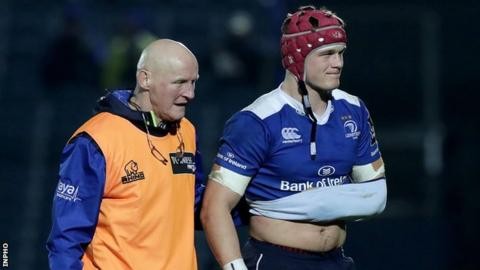 Leinster flanker Josh van der Flier has been ruled out of Ireland’s Six Nations game with France in Dublin on Saturday after suffering a shoulder injury.

The 23-year-old was forced off early in the province’s Pro12 win over Edinburgh on Friday and was not included in a 34-man squad named by coach Joe Schmidt.

Uncapped Munster wing Andrew Conway is called up, along with lock Quinn Roux, while winger Tommy Bowe is recalled.

Stuart McCloskey, Joey Carbery and Ultan Dillane are not in the squad.

McCloskey strained a calf in training with Ulster last week, although he may take some part in his side’s Pro12 encounter with Zebre on Sunday.

Munster’s Ian Keatley remains the preferred back-up for Johnny Sexton and Paddy Jackson in the fly-half position, despite Carbery scoring two tries for Leinster at the weekend.

Dillane played for an hour of Connacht’s win over Newport Gwent Dragons on Saturday without any apparent injury problems but Roux is called in to compete for the lock berths with Iain Henderson, Devin Toner and Donnacha Ryan.

Henderson missed the 63-10 win over Italy with a low-end hamstring strain but is set to return, along with skipper Rory Best, whose run of 51 consecutive Six Nations involvements was halted because of a stomach issue.

Van der Flier came on as a replacement for Sean O’Brien during both of Ireland’s first two Six Nations matches but his absence appears to leave the way open for Peter O’Mahony to occupy a place on the bench, although Dan Leavy may also have claims.

Schmidt is faced with the decision of whether to recall Jack McGrath at loosehead prop in place of his Leinster provincial team-mate Cian Healy, who was chosen for the victory in Rome.

Rob Kearney’s bicep problem will continue to be assessed during the week, with Simon Zebo and Tiernan O’Halloran the possible candidates to replace him should he fail to prove his fitness.

Competition for the wing positions looks fierce with Bowe back in the mix after scoring a try in Ulster’s triumph over Glasgow after being left out of the travelling party for the encounter with Italy.

Andrew Trimble’s return to fitness should see him included in the 23-man match-day squad and he could secure a starting berth should Zebo be required to slot in in place of Kearney in the number 15 shirt.