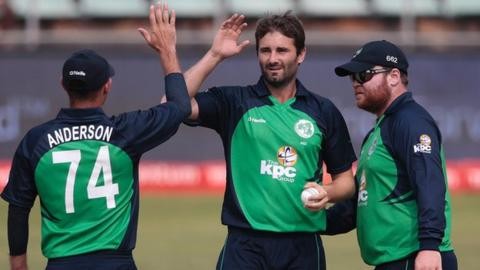 Ireland are aiming to play their first Test in 2018, according to Cricket Ireland chief executive Warren Deutrom.

The International Cricket Council (ICC) said earlier in February that the Irish would gain Test status this year, and that they could play their first match before then.

“I don’t see any reason why that can’t happen. I’d be surprised if we didn’t.”

The ICC’s plans come after a lengthy debate over the future of Test cricket, including how to spread the game and give each series more context.

The agreed solution is for a nine-team Test league, running over a two-year cycle – starting in 2019 – with every side playing each other once.

Three more teams – probably current Test side Zimbabwe and likely newcomers Ireland and Afghanistan – would be guaranteed a schedule of matches over the same two-year period.

The ICC said it will make a decision on granting Test status to Ireland and Afghanistan at its next board meeting in April, with that likely to be ratified at the annual general meeting in June.

It is thought there would be no barrier to both sides being able to play Test cricket immediately, but the schedules of other nations would probably mean a wait is necessary.

Deutrom admitted that, ideally, a first Irish Test would be at home, but that it would be difficult to turn down a “dream” scenario of an away match against England.

Even then, finding space in England’s summer would be incredibly difficult, with Pakistan and India set to tour in 2018.

England’s future programme could be linked to that of the Irish, with the ICC expressing its desire for teams that tour the country to also play at least one Test against Ireland.

Ireland first announced plans to gain Test status in 2012, a year after earning a famous victory over England at the 2011 World Cup.

They had already beaten Pakistan at the 2007 tournament and, in 2015, beat West Indies and Zimbabwe before narrowly failing to qualify from the group stage.

In October, Ireland’s Inter-Provincial competition became the first domestic tournament outside of a Test nation to be granted first-class status.