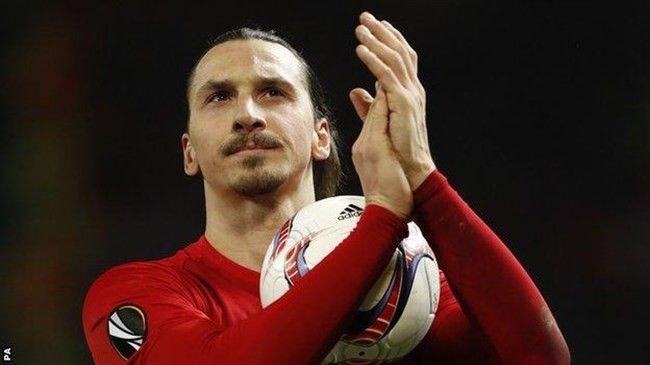 Ibrahimovic’s deflected free-kick wrong-footed goalkeeper Stephane Ruffier and dribbled over the line for the opener, and he tapped him from close range after good work from Marcus Rashford, as well as adding a late penalty.

Saint-Etienne caused United problems on the break in the first 45 minutes, particularly with Romain Hamouma’s pace, while Henri Saivet and Ole Selnaes both clipped efforts narrowly off target.

Ruffier’s double save denied Juan Mata and Anthony Martial forced the visiting goalkeeper into sharp saves, while Paul Pogba headed against the crossbar from close range.

There were question marks over the signing of veteran striker Ibrahimovic on a free transfer from Paris St-Germain in the summer, but the Swede has responded by taking his tally to 23 for the season.

The 35-year-old former Juventus, Barcelona and AC Milan man has now netted 17 career hat-tricks and his first since joining United.

Opponents Saint-Etienne will be pleased to see the back of Ibrahimovic when he retires having scored 17 times against them during his time in France.

Ibrahimovic has won 11 titles and three domestic cups during his career, but a major European trophy remains missing from his illustrious CV.

Cup treble on for United?

Like Ibrahimovic, United have never won this competition, but the result keeps alive their hopes of a cup treble this season. They face Blackburn in the FA Cup fifth round on Sunday and face Southampton in the EFL Cup final the following week.

In his first season at Old Trafford, Jose Mourinho’s side are just two points off a Champions League spot in the league, but triumph in the Europa League would give them an automatic passage through to Europe’s elite club competition.

Against Saint-Etienne, the Red Devils tested Ruffier on numerous occasions but he was left floundering for the first goal, while his parry allowed into the danger area allowed the second.

On the other hand, the Ligue 1 side carved United’s backline open with ease at times, with defender Eric Bailly looking particularly suspect, but they failed to work goalkeeper Sergio Romero into a single save.

The world’s most expensive player, Paul Pogba, was up against his brother Florentin, who was signed by the French side for 500,000 euros in 2012.

Mother Yeo and third brother Mathias watched from the stands as the two shared a warm embrace before kick-off, with the elder sibling Florentin sporting a number 19 on one side of his head and his brother’s six on the other.

France international Paul showed why United spent £89m to sign him from Juventus in the summer with a dominant midfield performance in which he controlled the tempo of the match.

However, on one occasion he inadvertently gave the ball away to Florentin, whose burst forward eventually saw the ball reach Saivet, but the on-loan Newcastle man could not find the target with his shot.

Florentin’s rising drive in the first half almost saw him nick an away goal for his side, while Paul wasted good chances in the second period, the best of which came as he headed against the woodwork when unmarked.

The Saint-Etienne defender’s evening ended early as he hobbled of with an injury with 12 minutes remaining.