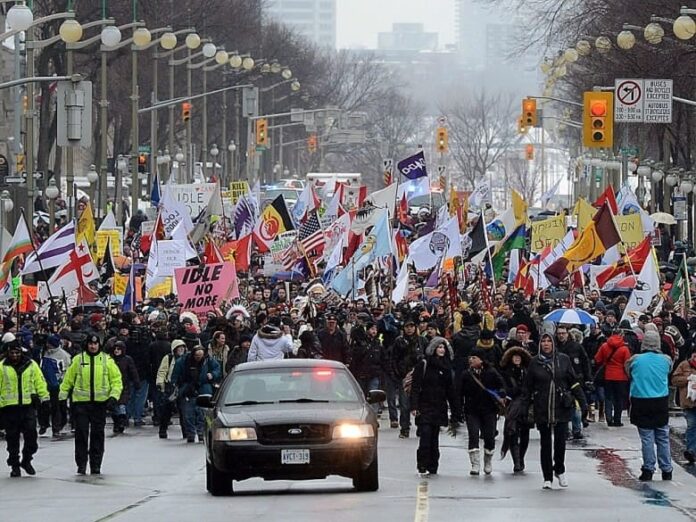 Unreserved49:48A decade of Idle No More

When Sylvia McAdam recalls the early days of Idle No More in November 2012, she remembers the excitement and beauty of Indigenous people coming together.

At the time, she couldn’t anticipate that the flash mobs taking over malls across the country – with round dances, singing and drumming – would both shift the conversation about Indigenous rights and sovereignty but also help lay the foundation for reconciliation work in the future.

And 10 years later, the ripple effects of the movement are still spreading.

“It was an incredible time of prayer and just sacred gathering. It just brought so many people together,” Idle No More co-founder Sylvia McAdam told Unreserved host Rosanna Deerchild.

McAdam, a law professor at the University of Windsor from Big River First Nation, said the first impromptu round dance she witnessed that fall was a powerful experience.

“A 17-year-old young Indigenous woman gathered up her friends and they grabbed up their drums and they went to the downtown mall of Regina,” she said. “They start drumming and singing, and you could see security trying to move them along. And they would just gently pull away from security and just continue singing.

“And like any Indigenous people, when you hear the drum, holy heck, you can’t get away from it. You’re propelled towards it.”

The seeds of Idle No More were planted when four women from Saskatchewan – McAdam, Jessica Gordon, Nina Wilson and Sheelah McLean – decided to do something about the federal government’s Bill C-45, which they opposed.

The piece of legislation, crafted by former prime minister Stephen Harper’s government, was dubbed an omnibus bill due to its size and scope. At over 400 pages, the legislation proposed changes to the Indian Act, the Navigable Waters Protection Act and the Environmental Protections Act.

The four women were concerned that the legislation would make it easier for the federal government and corporations to extract resources from Indigenous territories without consent. This, in effect, would be an attack on Indigenous sovereignty, McLean suggested.

So, she said, they started educating.

“We knew that we could get a large group of people involved if we could just make them aware of the dangers of these government policies,” she explained.

McLean isn’t Indigenous but said her years as a public school teacher showed her there was a lack of knowledge in the country about the historic injustices Indigenous people face, Indigenous rights and environmental issues.

“Even though we have a public education system, we still needed, as a movement, to educate the public on these specific issues because we are living in a colonial context,” she said.

Round dances for change

The Idle No More message began to spread through teach-ins, public forums to learn about and discuss Bill C-45. Then it spread like wildfire through social media.

Flash mobs with drumming, singing and round dancing sprung up in malls throughout the Prairies. Similar events arose in other provinces and territories. Crowds gathered at provincial legislatures and on Parliament Hill in Ottawa to voice their concerns.

Then, the message went global. The Idle No More movement became not just about Bill C-45, but about dismantling the harmful effects of colonization.

“[It] just created this whole prayer, I think, that just went all over the world,” McAdam said.

The university professor remembers a letter Idle No More organizers received in the early days of the movement that still brings tears to her eyes. It was a letter from an Indigenous chief in Brazil.

“They sent us a message saying that corporations were sending paramilitary people to remove them from this river because they were going to build a dam,” she recalls.

“And there they were, this chief and his people. They were standing against [a paramilitary group] and they had bows and arrows and spears, and they were chanting ‘Idle no more! Idle no more!'”

Growing up in the movement

Aiden Todd and her daughter, Ryleigh, are from Norway House Cree Nation in Manitoba. They live in Winnipeg and remember the excitement of hand drumming flash mobs in the city’s Polo Park Mall 10 years ago.

“There were two women drum groups and we came together as one, and we just had this beautiful, like, union of music and prayers,” the mother said. “It was just beautiful. Like, I can’t even describe it because it’s never happened like that, in that capacity.”

As Indigenous women, the mother and now 16-year-old daughter face challenges and discrimination every day, Todd said. She brought Ryleigh to Idle No More events because she wanted her daughter to feel the strength and unity of their people and understand that Indigenous communities can overcome injustices together.

“Being one with each other, I think, will just help Ryleigh in the long run,” her mother said.

Ryleigh was her mother’s “sidekick” at Idle No More events. She also tagged along to other demonstrations and events about Indigenous rights and issues, including the plight of missing and murdered Indigenous women and girls.

The teenager said the experience opened her eyes to injustice.

“Being young and seeing that made me want to fight for our people’s rights and fight for other people to be able to see us,” she said.

Today, the teenager is eyeing a future career in the medical field – possibly as an ob-gyn or ultrasound technician – to help Indigenous mothers.

“I know our health-care systems are very corrupted, especially when it comes to health care towards Indigenous people and racism,” she said. “I want to help make them feel included and make them feel safe.”

Widia Larivière is from Timiskaming First Nation in Quebec. Ten years ago, she watched the Idle No More events take place in English-speaking parts of the country and wondered if anything was happening in her home province.

There wasn’t, but she was asked if she wanted to organize a march.

“I was like, ‘OK, why not? Let’s do it,'” Larivière said. “It was just really spontaneous and we didn’t know what we were getting ourselves into.”

She created a Facebook page and event, scheduled for Dec. 21, 2012, and started inviting people and sharing information.

“It was winter and was really, really cold. I think there was even a bit of a storm, so we really had to be motivated, you know, to be part of it,” she said. Despite the cold weather, the first Idle No More event in Quebec drew 500 people, she recalls.

“[I thought] we would end up with 10,” Larivière said. “I was just really inspired with the presence of so many Indigenous youth and women … At that time, I realized that the movement was also having a lot of positive impact on Indigenous youth to revive their cultural pride and their willingness to get involved in their communities.”

In Larivière’s eyes, the Idle No More movement has led to huge changes in Canada – from the federal government, to the media to local communities.

“Idle No More still exists today because [of] the changes that we started doing at that time,” she said. “[We] are still working on them today, bit by bit.”

Idle No More didn’t stop the passage of Bill C-45; the legislation passed in the House of Commons in December 2012.

Both McAdam and McLean believe Idle No More changed the social and political climate in Canada, and helped lay foundations for the pivotal work of the Truth and Reconciliation Commission and Missing and Murdered Indigenous Women and Girls Inquiry.

“I think it became almost like a bullhorn to bring these, I don’t want to call them issues, but to bring [these things] to the forefront … putting enough pressure on the colonial state that they had no choice but to take a look,” McAdam explained.

McLean noted that the movement served as a source of support and awareness raising; if a First Nation objected to resource exploration, use or extraction on their traditional territory, they could tap into this network.

And that network stretches from coast to coast.

When Elsipogtog First Nation in New Brunswick opposed shale gas exploration on its land, there were protests across the country in support. Wet’suwet’en hereditary chiefs’ opposition of the Coastal GasLink pipeline that would run in part of their traditional territory in British Columbia also ignited cross-country protests.

“There was this new understanding of what it means for Indigenous people to defend the land,” McLean said.

McLean added that Idle No More has been organizing Cancel Canada Day events for the past few years. In 2021, following the revelations of unmarked burial sites at former residential schools, Cancel Canada Day took on a new meaning.

“Hundreds of thousands of people [were] out wearing orange shirts instead of what they would usually be doing, which is wearing shirts with Canada flags on it,” McLean said. “That was so significant for people to start to see that there are more important issues that we need to contend with as a country.”

‘This is our land’

McAdam used to say that she wanted her children to take up the Idle No More mantle when she’s gone. But lately, she’s had a change of heart.

“No,” she said. “It has to end with me. I want to go on my spiritual journey knowing that my people have freedom, liberation and self-determination. That is what I hope for and that is what I work towards.

And it will happen, it will.”

That freedom and self-determination will come when the federal government upholds its treaty terms and promises and when the Indian Act and the Catholic church’s Doctrine of Discovery are no longer used to violate Indigenous rights, she suggested.

McAdam has hope for the future.

“I have grandchildren that are very familiar with Idle No More,” McAdam continued. “We go out to our family’s hunting lands. One day my granddaughter, she grabbed a handful of the sand and she said, ‘This is our land, right nohkom? This is our land.’ And I said, ‘Yep.’ And she believes it with her heart and soul.”