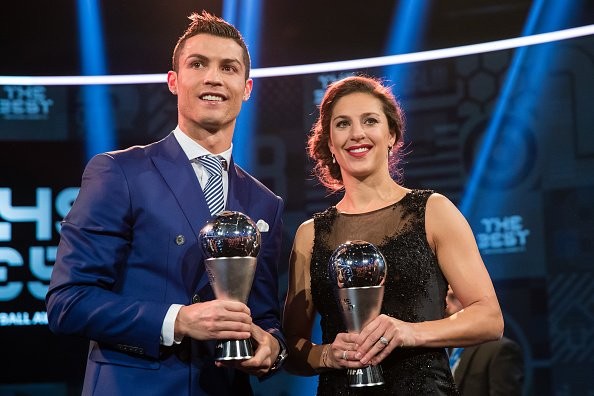 When Carli Lloyd scored from the halfway line to complete a hat-trick in the first 16 minutes of the 2015 Women’s World Cup final, her United States team-mate Hope Solo ran from her goal to scream: “Are you even human?”

Having already scored winning goals in the 2008 and 2012 Olympic finals, Lloyd was already one of the most celebrated players in the United States.

But earning America’s first World Cup in 16 years and scoring such a spectacular goal pitched the midfielder’s status to almost superhero level, with 2015 and 2016 Fifa World Player of the Year awards following.

After spending years training on her own in a sparse field in Delran, New Jersey, and showing a single-mindedness which led to a relationship breakdown with her parents, Lloyd had finally proven her doubters wrong to reach the pinnacle of her sport.

Now a new journey begins for the 34-year-old US captain after leaving Houston Dash for a short-term deal with Manchester City, which former England striker Kelly Smith, a former club team-mate of Lloyd’s, calls a “coup”.

City will now hope Lloyd’s undoubted stardust and renowned dedication rub off on a team who are gunning for the Champions League title in their competition debut.

For those unfamiliar with Lloyd’s story, her 55-yard lob in the World Cup final victory against Japan was no fluke.

It was the product of a feverish commitment to training – which included smashing shots from the halfway line – with her coach and mentor James Galanis. He has been credited with moulding a young player with serious confidence problems and a body not built for an elite midfielder into the world’s best player.

As detailed in her autobiography, When Nobody Was Watching, it is clear nothing gets in the way of Lloyd’s ambition to continually improve. And the good news for Manchester City fans is that, even after her World Cup triumph, she believes she can get even better.

“Her determination exceeds anyone I’ve ever met,” Smith, who played with Lloyd for the New Jersey Wildcats in 2004 and spent the majority of her playing career in the US, told BBC Sport.

Fuelling that drive is a quest for perfection and a desire to prove people wrong. It began when she was dropped from the Under-21 national team and was ready to quit football altogether, toying with the idea of becoming an FBI agent.

But then she met Australian coach Galanis, a trainee electrician, who offered a turning point in her career and proved a lifelong mentor. In 2004 he concocted a 12-year plan, which included Lloyd becoming World Player of the Year by 2016.

While her relationship with Galanis has been the backbone of her success, some of her family have blended into the background.

Her golfer husband, Brian Hollins, whom she met in her teens, has learned to stay away from big tournaments to prevent any distractions. And Lloyd’s long-running feud with her parents dates back to the beginning of her career when she chose to do things her own way.

They disapproved of her aloofness around US team-mates and a choice of agent, and weeks before her triumph at the 2008 Beijing Olympics, asked her to move her possessions out of their home.

Lloyd hints in her book they may have been jealous of the part Galanis has played in her career and despite calling the situation “heartbreaking”, has not spoken to them since 2012.

Lloyd says she “doesn’t do fake” and has had disagreements with former US coaches but current manager Jill Ellis, who has had a long-standing connection with her captain since she managed the under-21 team, has said Lloyd is “team-orientated” and “real”.

Washington Spirit midfielder Joanna Lohman, who has known Lloyd since they were 14 and played in the same US youth team, told BBC Sport: “It’s great to have that edge, look where it’s taken her.

“When you don’t back down on things and you see things as challenges as opposed to failures, it pushes you even harder.”

How good is Lloyd?

As a big Liverpool fan, Lloyd has always looked up to former Red Steven Gerrard as the player she wanted to emulate: a box-to-box midfielder with an eye for goal and a fearsome shot.

Smith likens her more to former Chelsea midfielder Frank Lampard for her “goalscoring ability, and how she arrives late in the box” but says it has taken time to develop those skills.

“She wasn’t the most technical back when we played, she isn’t like Brazilian forward Marta, who beats two or three players at a time,” Smith adds. “But she was always very fit, had a fantastic work-rate and was a winner.”

That much has been proven in her international career, with three major titles and 96 goals in 232 appearances, making her the national team’s all-time highest goal-scoring midfielder. Current US boss Ellis calls Lloyd “incredible for her consistency in big games”.

Club success for Lloyd has been less impressive. She is yet to win a US domestic championship – the closest she came was a runners-up medal with Western New York Flash in 2013, so winning the Champions League or FA Cup with Manchester City would be a glittering addition to her CV.

Can she help City achieve that success in the twilight of her career? Lloyd has already proven that age has little effect on her work-rate.

“Carli’s a leader on and off the pitch and her winning mentality will help them reach the next level,” Smith says.

Former England captain Casey Stoney says Lloyd will have a massive influence on City and the league.

“She’s not past her peak,” the Liverpool defender said. “Look at [Manchester United forward] Zlatan Ibrahimovic – he’s playing some of the best football of his career and he’s 35.

“Experience buys you time on the ball and better decision-making. It wouldn’t surprise me if she was playing in the next World Cup in two years’ time.”

Why has Lloyd come to England?

If Manchester City were looking for a marquee signing to demonstrate their growing status in women’s football, then Lloyd is a stunning addition to their squad.

Lloyd is one of several US players who have recently left their country to ply their trade in Europe.

But according to Stoney, Lloyd will be “the biggest overseas player to have played in England, without a doubt”. It is likely she will have a salary to match.

City, who only played their first season in the FA Women’s Super League in 2014, won the title last season, and with the club’s wealthy owners investing more in players and facilities than any other English side, a period of dominance looks likely.

Part of that masterplan is to make inroads in Europe in their debut Champions League season, which continues with a quarter-final tie against Danish side Fortuna Hjorring on 23 March.

But as much as Lloyd can benefit City, they can also provide a new chapter for the attacking midfielder.

US boss Ellis, who was born in England, has encouraged American players to experience European football in a year when there are no major tournaments. It comes at a time when US players are in a pay dispute with the national federation, but Smith believes it has more to do with the quality of the football on offer in Europe.

“The game in America can often be quite back to front and long ball, but players are more technical in Europe and nowhere more than in the Champions League so players want to sample that,” she says.

“Lloyd will also experience the best facilities around. Sometimes in the American league you use university pitches and changing rooms, so to be part of a club like Manchester City can be quite precious to Carli.”