Gyan among more than 40 footballers with ‘unethical hair’ in UAE 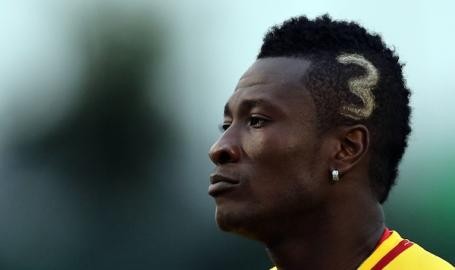 Former Sunderland striker Asamoah Gyan is among a group of more than 40 players deemed to have “unethical hair” under United Arab Emirates Football Association (UAEFA) guidelines.

The 31-year-old Ghanaian is on loan at Dubai-based Arabian Gulf League side Al Ahli from Shanghai SIPG.

Some Islamic teachings ban ‘Qaza’ hairstyles, where only part of the head is shaved.

Some match officials in the United Arab Emirates enforce the rules because they are concerned about children copying the styles.

Similar guidelines have been enforced in neighbouring countries. In 2012, Saudi Arabia goalkeeper Waleed Abdullah was told to cut his “un-Islamic” hair by the referee before playing for his club side Al Shabab.

The UAEFA sends a player’s club a warning letter in the first instance, with punishments escalating to a fine and then a suspension if he does not comply.

Gyan is one of 46 players at the warning letter stage.

According to Middle Eastern football website Ahdaaf, Al Wahda’s Suhail Al-Mansoori (pictured below) was told to cut his hair while UAE international and 2016 Asian footballer of the year Omar Abdulrahman, who sports a similar style and also plays in the Arabian Gulf League, was let off.