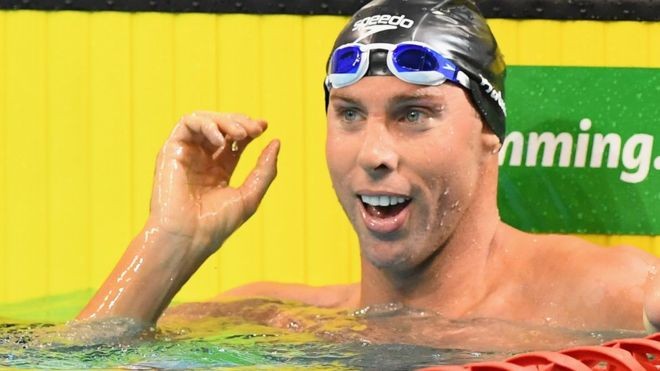 Hackett, 36, was on Wednesday arrested and released without charge after becoming agitated at his parents’ home.

On Thursday, his father appealed for help finding him, saying he was “disturbed” and needed urgent help.

Nev Hackett later told local media his son had messaged his mother to say he was safe.

“He’s spoken to police. He’s actually hiding because he’s very, very embarrassed about all this,” he told reporters.

Before his disappearance, Hackett was last seen at a hotel, according to local media.

Nev Hackett said his son had missed an appointment with his lawyer and the family was “extremely worried”.

“When we spoke to him several hours [ago], he just hung up when we asked him where he was,” he said.

“Grant, let us know where you are, we love you, and we want to help you,” he said.

Local media reported Hackett indicated he would seek help after being released from police custody on Wednesday.

His brother, Craig Hackett, said the former Olympian was “a danger to himself”.

On Thursday, Hackett had posted a picture of himself on Instagram sporting a black eye. It was unclear when the image was taken.

He returned to the pool last year to make an unsuccessful bid to qualify for the Rio Olympics.

He was questioned by airport police in Melbourne last April after allegedly assaulting a male passenger over a reclined seat on a flight. Hackett said he had been drinking in the wake of his Olympic disappointment and publicly apologised.

Hackett has previously admitted he became dependent on a sleep medication.

The swimmer flew to the United States in 2014 to spend time in a rehab centre after he was spotted topless and disoriented in the lobby of a Melbourne casino.