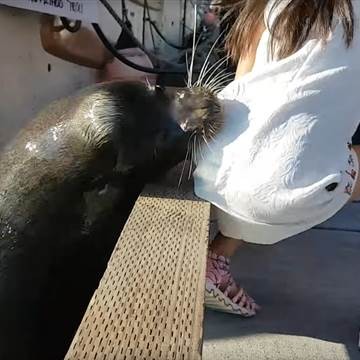 Michael Fujiwara captured video on Saturday of a girl being snatched off a dock by a sea lion and pulled into the water in Richmond, British Columbia.

A video went viral earlier this week showing a sea lion grabbing a six-year-old Canadian girl’s dress and pulling her into the water from a dock in Richmond, British Columbia.

The girl’s fast-acting grandfather jumped into the harbor and pulled her to safety.

During the ordeal, she received a superficial wound and is being treated for a possible bacterial infection.

Marine life experts had warned she could be at risk for getting a rare infection referred to as seal finger.

Infections are caused when bacteria from a sea mammal’s mouth makes its way into a person’s skin via a cut.

If left untreated without antibiotics, a severe infection could lead to loss of a finger or limb.

“The family contacted the Vancouver Aquarium for help, after one of the facility’s mammal trainers spoke about the condition during several interviews over the weekend.

“The family saw the media reports and got in touch with us. She did get a superficial wound, and she’s going to get the right treatment.

“If any member of our animal care team receives a bite from a seal or sea lion, they take a letter from our vet with them to the hospital, which explains that the infection is resistant to some antibiotics.”

The girl’s family has been fending off social media outrage accusing them of feeding the sea lions.

“There was somebody beside them that was trying to feed them. Also, they weren’t trying to take pictures or anything.”

The father, who was only identified by the last name Lau, did admit that his daughter had been too close to the sea lions.

Lau, a resident of Vancouver, credited the grandfather’s quick thinking for the positive outcome.

“If he had one- or two-second doubt about that, my girl could have been gone by then. That reaction, makes him a hero,” he told the CBC.

Before antibiotics, seal finger, also known as sealer’s finger and spekk-finger (from the Norwegian word for blubber), was a serious threat to hunters or people handling untreated pelts. They risked losing fingers or hands to the disease.