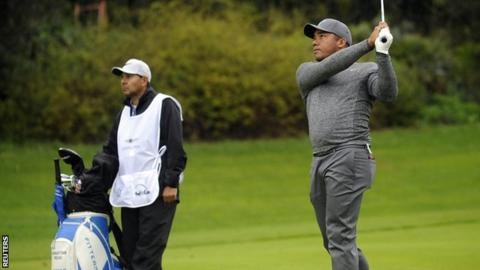 Only 24 players were able to complete their second rounds at the Genesis Open as a heavy storm battered Riviera Country Club in California on Friday.

A huge limb from a eucalyptus tree fell near the third hole and with heavy rain falling play was called off at 12:18pm.

Venezuelan Jhonattan Vegas picked up three shots and was seven under after 14 holes when the round was ended.

That put him level at the top of the leaderboard with Sam Saunders, one of those not to hit a shot on Friday.

Officials hoped to resume play on Saturday at 7am local time (15:00 GMT).

World number six Jordan Spieth also improved by three shots in the 16 holes he managed and was five under alongside second-round clubhouse leader Cameron Percy of Australia.

Scotland’s Martin Laird was one of the few to complete his round and a three-under 68 left him inside the top 10 on four under.

Vegas, one of 48 players who had returned early on Friday morning to complete a first round which had been delayed by fog, dropped only one shot in his 14 holes in round two.

He said: “I knew I was going to hit a lot of bad shots so had to find a way to get a lot of up-and-downs. Staying patient was the key.”