Gabriel Jesus: Manchester City forward ‘may be out for season’ 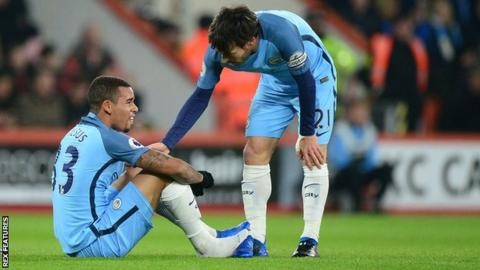 Manchester City boss Pep Guardiola says forward Gabriel Jesus may not play again this season after breaking a metatarsal bone in his foot.

Jesus, 19, had surgery on Thursday after being taken off after 15 minutes of Monday’s 2-0 Premier League win at Bournemouth.

“He comes back at the end of the season or next season. People say between two and three months,” said Guardiola.

The Brazil international completed a £27m move from Palmeiras in January.

Metatarsals are the five long bones in the forefoot which connect the ankle bones to those of the toes.

The first is linked to the big toe and the fifth, on the outer foot, links to the little toe.

Together, the five metatarsals act as a unit to help share the load of the body, and they move position to cope with uneven ground.

Injuries usually occur as a result of a direct blow to the foot, a twisting injury or over-use.

Medical experts recommend rest with no exercise and sport for four to eight weeks.

The patient might be asked to wear walking boots or stiff-soled shoes to protect the injury while it heals.

If the cause is over-use, then treatment can vary hugely. Training habits, equipment used and athletic technique should all be investigated.

It all depends on the damage and which metatarsal bone is involved. It is impossible to put a timescale on recovery from a stress injury.

With an impact fracture, after the plaster and protective boot is not needed (usually after four to six weeks), it will be a case of exercise and increasing weight-bearing activities.

Ice packs, strapping and even the use of oxygen tents can be used to assist recovery.

Full return to action can be anything from another four weeks and upwards – depending on the extent of initial damage. Young bones heal quicker.