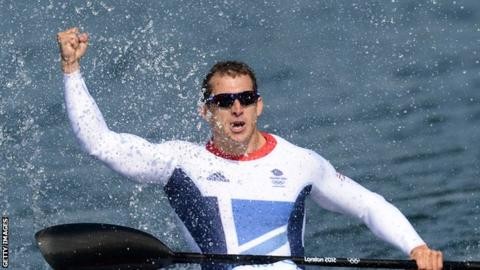 Great Britain’s Ed McKeever, who won gold at the London 2012 Olympics, has retired from canoe sprint.

The 33-year-old, who was awarded an MBE for his services to the sport in 2013, claimed Olympic gold in the 200m men’s single kayak.

However he failed to qualify for the Rio Games, with team-mate Liam Heath making the GB squad and winning gold.

McKeever said winning a gold medal at a home Olympics will “live with me for the rest of my life.”

“Very few people get that opportunity so I am extremely grateful for all the support,” he said.

“The memory that stands out for me was standing on top of the podium and singing along with the national anthem, especially knowing that my friends and family were there watching.”

He became world and European champion in 2010 and won five World Cup series gold medals during his 17-year career and said becoming a father played a part in his decision to retire.

“Having a son four weeks ago means that I want to spend some time at home and realistically you can’t also live the life of a full time athlete which is inherently quite a selfish one and doesn’t really fit with the life of a parent,” he said.

“I want to spend some time with my family and this has been a strong driver for my retirement.”