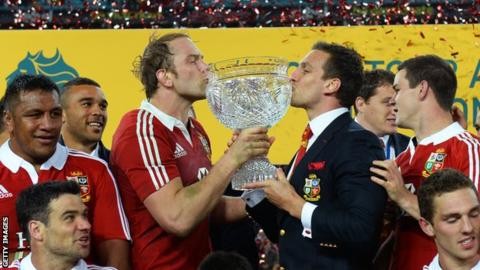 Jones’ credentials put him “out on his own” according to Scotland’s Hastings, who led the 1993 tour to New Zealand.

“I think Jones is showing his characteristics as a leader of men,” said Hastings.

Jones led the Lions in the decisive final Test in Australia in 2013.

“He’s a guy that’s been around the block more than once. No-one else (is in the frame),” added Hastings, who was also part of the winning tour of Australia in 1989.

“I think Jones is out on his own. [England’s] Dylan Hartley’s gone backwards a wee bit.”

The Wales lock, 31, is also seen as a front-runner by World Cup-winning captain Johnson and Ireland’s O’Driscoll, even though he only took over the Wales leadership on a regular basis in 2017.

“The front-runner has to be Alun Wyn Jones, he captained the Lions in the final game in 2013, he’s respected in New Zealand and you have to anticipate he’s going to be a Test starter. He certainly would be on my team,” said O’Driscoll, Lions captain in 2005 and 2009.

“Alun Wyn is probably the front-runner at the moment but there’s lots to happen between now and the announcement of the squad.”

Former England lock Johnson, who was victorious on the 1997 tour of South Africa and also led the 2001 trip to Australia, thinks Jones’ performance in the Six Nations defeat to England in Cardiff has edged him ahead of Scotland’s Greig Laidlaw, Hartley and Ireland’s Rory Best.

“All four nations captains have a chance, though Greig is out of the tournament which is unfortunate,” Johnson told BBC Wales Sport.

“You’ve got two hookers, but I thought Jones played really well so maybe he’ll have his nose slightly in front.

“He’s an experienced player, been out there before, playing pretty well.”

The Lions tour to New Zealand kicks off on 3 June, with three tests on 24 June, 1 and 8 July in Auckland, Wellington and Auckland again.