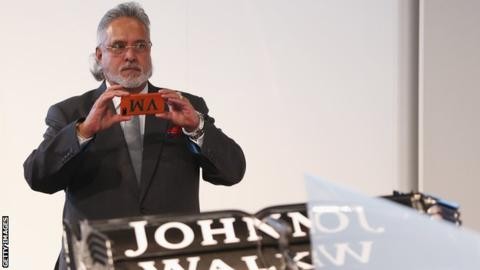 Force India aim to break into Formula 1’s top three for the first time after launching their 2017 car.

The VJM10 was unveiled at Silverstone on Wednesday by Sergio Perez, entering his fourth year as a driver with the team, and new recruit Esteban Ocon.

“We have never had conversations, even in private, that we cannot break into the top three.”

The Indian businessman indicated that Renault managing director Cyril Abiteboul may come to regret suggesting that the sport will become an “arms race” this season.

Abiteboul, speaking at Renault’s launch on Tuesday, said new regulations will allow Renault to “be easily capable of beating teams like Haas and Force India”.

“[Abiteboul] may have to eat his words – it’s not about the arms you have, it’s about the quality of your machinery,” said Mallya.

Mexican Perez, 27, finished seventh in the 2016 drivers’ championship, behind the six drivers from Mercedes, Red Bull and Ferrari.

“It makes me feel confident that in the four years I’ve been in the team, I know the right people have been working on this car,” said Perez.

“I expect to have a very big year for the team.”

Following the departure of Nico Hulkenberg to Renault, Perez is joined by 20-year-old Frenchman Ocon, who raced nine times for the now-defunct Manor team in 2016.

“I’ve got to aim to score points at every race,” said Ocon.

“That’s the level of this team and I will be disappointed if we don’t start the season with some good results.”

Force India did superbly to finish fourth last year but is their target of going one place better this season realistic for a team of limited resources at the start of new regulations?

Their new car is not exactly attractive, with its 2014-style anteater nose and 2012-esque chassis hump.

But they are the experts at making the most out of their resources and can be expected to punch above their weight again.

How high remains to be seen.