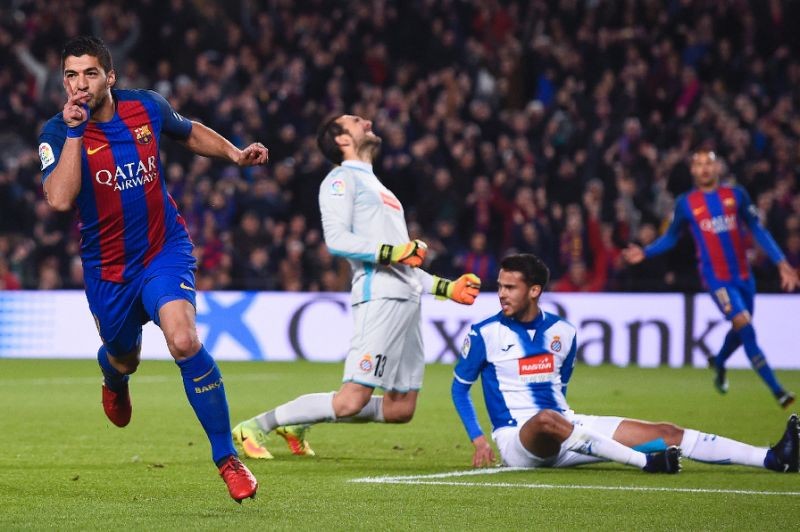 Gareth Bale made his return from a three-month injury layoff in style as Real Madrid maintained their one-point lead over Barcelona in the La Liga title race.

Barca, meanwhile, had to rely on a last gasp Lionel Messi penalty to see off Leganes, whilst Kevin Gameiro netted one of the fastest hat-tricks in La Liga history for Atletico Madrid.

Barcelona got back to winning ways by the skin of their teeth against lowly Leganes.

However, another poor performance following a 4-0 thrashing at the hands of PSG in midweek did little to inspire confidence that Luis Enrique’s men can overhaul Madrid in the coming months.

The hosts needed a Messi penalty a minute from time to edge out a Leganes without a win since November and on their first ever league visit to the Camp Nou.

Tellingly, Messi didn’t even celebrate the winner, whilst there were widespread jeers for much maligned midfielder Andre Gomes and under-fire coach Luis Enrique.

– Bale back with a bang

Bale had waited through three tough months of recovery work to return to action, but only had to wait 13 minutes to get back on the scoresheet as he made an instant impact for the European champions.

The Welshman showed his trademark pace and accuracy on his left foot by firing low across Diego Lopez to dissuade any Real nerves about holding a slender lead seven minutes from time.

“I was happy just to be on the pitch,” said Bale afterwards. “To get a goal is an extra bonus.”

Granada made La Liga history on Friday by naming 11 different nationalities in their starting line-up.

The combination of a Mexican, Icelandic, Uruguayan, Nigerian, Colombian, Ghanaian, Moroccan, Brazilian, Frenchman, Spaniard and a Cameroonian worked wonders for the Andalusians as they smashed Real Betis 4-1 to record just their third win of the season.

Despite a paltry return of just 16 points from 23 games, Granada are now just two points off safety and are showing the greatest signs of life of a cut adrift bottom five.

Kevin Gameiro hadn’t scored a La Liga goal since November when he was summoned from the bench with Atletico Madrid tied a 1-1 away at Sporting Gijon on Saturday.

Yet in a five-minute spell, Gameiro plundered one of the fastest hat-tricks in La Liga history late on to hand Diego Simeone’s men a flattering 4-1 win.

The French international had divine inspiration on his side as he dedicated the goals to his grandmother who passed away this week.

Simone Zaza’s last minute loan move to Valencia in January had all the hallmarks of desperation on part of both player and club after a miserable first half to the season.

Fresh from skying a vital penalty against Germany at Euro 2016, Zaza failed to score a single goal in five months on loan at West Ham United.

Valencia, meanwhile, were mired in a relegation battle.

The fact they may no longer be owes much to a turnaround of fortunes for both parties as Zaza scored his first goal since May 1 as Valencia downed Athletic Bilbao 2-0 to move seven points clear of the drop zone.

And the Italian was so relieved he cried as he was mobbed by his teammates.