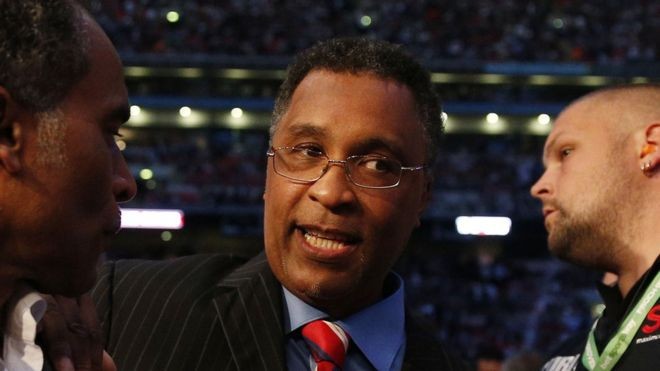 Former boxer Michael Watson has told of being attacked by two men who dragged him along the road as one of them tried to drive off in his car.

Mr Watson, 51, described the incident in Chingford, east London, on Thursday as “a very frightening, violent situation which came out of the blue”.

The boxer, who suffered a near-fatal brain injury in a 1991 fight with Chris Eubank, appealed for witnesses.

“I am overwhelmed with… the kindness shown to me,” he said.

“I don’t want anyone else to have to go through that, so I’m asking you to help the police in finding these men and bring them to justice.”

Mr Watson was in a car with his carer Lennard Ballack when it was hit from behind by a white Mercedes at traffic lights at about 17:00 GMT.

Mr Ballack tried to speak to the driver but was sprayed in the face with “some sort of ammonia”, former boxer Spencer Oliver told BBC Radio 5 live.

Mr Watson got caught up in the seatbelt as he tried to get out. As the car was driven off, he was “hanging out of the door”, said Mr Oliver.

Mr Watson is recovering at home from injuries to the skin caused by being dragged along the road.

Mr Watson’s 1991 WBO super-middleweight title fight with Mr Eubank left him partially disabled and ended his boxing career. He spent 40 days in a coma and had six brain operations.

In 2003, he completed the London Marathon over six days, defying doctors’ predictions that he would never walk again.