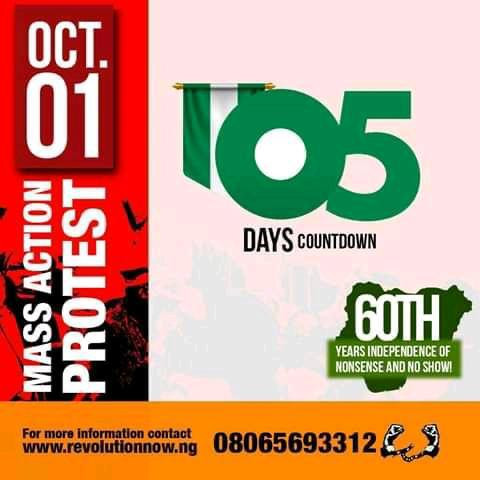 5 DAYS TO GO: “Each generation must, out of relative obscurity, discover its mission, fulfill it, or betray it”-Frantz Fanon. Our generation’s mission is #RevolutionNow. We are not betrayers. On #Oct1stProtest we’ll fight to fulfil history. #BuhariMustGo #OccupyNigeria #occupynigeria2

The Coalition for Revolution is calling on all Nigerians at home and in the diaspora to come out en masse on, October 1, and participate in a massive peaceful protest to demand the reversal of anti-people policies implemented by the President Muhammadu Buhari-led administration.

These harsh policies that have bored a burdensome hole into the pockets of the Nigerian people are coming at a time when citizens are recovering from the adverse effect of the COVID-19 pandemic, a global health crisis that was also mismanaged by the Buhari’s government further plunging already struggling citizens into deeper financial problems.

It also comes at a time when there is an unprecedented dictatorial-style crackdown on free speech, dissent, activism, journalism and the right to associate and congregate peacefully and protest.

CORE is therefore mobilizing all Nigerians to protest and demand action on the following:

The protests will take place in all 36 states across Nigeria and in the following cities outside the country.

All protesters are expected to wear light long-sleeved clothing (with a touch of orange if possible), jean trousers or athleisure wear, running shoes for ease of movement, water, placards bearing inscriptions, and means of identification.

CORE is aware of plans by the Nigerian police to scuttle the protests in some locations and as such advises all protesters to be vigilant at all time and avoid confrontation as this is a peaceful protest. All participants are also encouraged to bring fully charged mobile devices to record, live-streams and