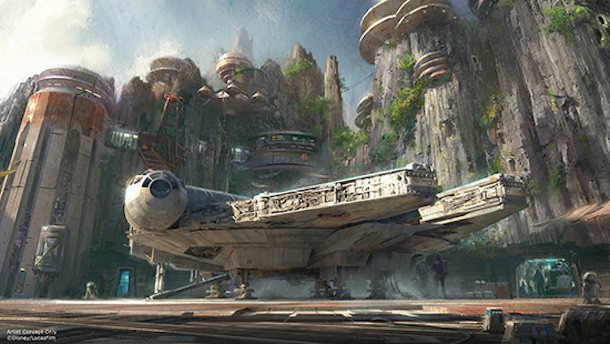 Is it too early to purchase tickets for a 2019 Disneyland trip?

During a special preview, Bob unveiled a large-scale model for the Star Wars-themed lands being planned for the Disneyland Resort in California and Disney’s Hollywood Studios in Orlando, Fla.

“To say we are excited for the Star Wars-themed lands to open in 2019 is an understatement,” Bob said during the announcement. “All along, we have said this will be game-changing, and through the model we can begin to see how truly epic these immersive new worlds will be.”

The model shows two attractions that will be the main parts of the 14-acre areas. And for those counting, this is the largest single-themed land expansion for both parks.

While the model will remain on display all weekend long at the expo, Bob plans to share exciting new details about the project during the Walt Disney Parks and Resorts Hall D23 presentation on Saturday.

When the new lands were first announced at D23 in 2015, E! News confirmed that guests will be transported to a “different planet” where all restaurants and stores will be operated by “local inhabitants.”

According to ABC7 Los Angeles, the first attraction will give visitors the chance to pilot the Millennium Falcon on a customized secret mission. The other ride will put people in the middle of a fight between the First Order and the Resistance.

With construction underway at both parks, Disney hopes that everything will be complete in just two years.