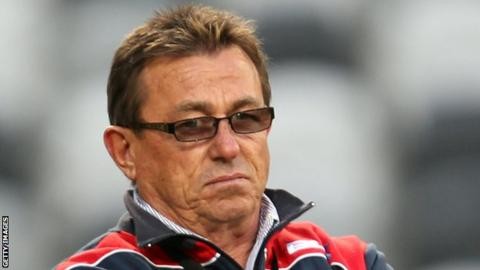 Connacht have announced that former All Black Kieran Keane is to become their new head coach to succeed Bristol-bound Pat Lam.

Keane, who played six times for the All Blacks in 1979, has been handed a three-year deal by the Irish province.

Christchurch-born Keane, 63, will move from his assistant role at the Chiefs at the end of the Super Rugby season.

Keane is renowned as an attack coach and Connacht bosses believe he will be the “ideal fit” for the province.

Under Lam, Connacht developed a ball-in-hand attacking style of rugby which helped land a sensational Pro12 triumph last season and the province’s chief executive Willie Ruane says Keane will continue with this philosophy.

“Kieran is a highly experienced head coach with a winning track record and a proven ability in identifying talent and maximising the full potential of that talent,” added the Connacht chief.

“His ambitious and exciting brand of rugby is also consistent with the way Connacht Rugby and in particular our players want to continue to play the game into the future.”

Keane did not earn any Test caps for the All Blacks but did play for his country during the 10-game tour of England, Scotland and Italy in 1979.

The former schoolteacher’s coaching career included guiding the Tasman Makos to a place in the Premiership final in New Zealand’s domestic game in 2014 after his side achieved promotion by winning the Championship a year earlier.

Keane has also coached the New Zealand Under-16 and Under-17 sides in addition to an assistant coaching stint at the Highlanders in 2011 and 2012.

His role with the Chiefs over the last year has centred on having responsibility for the team’s attack and they scored 76 tries in 17 games during their Super Rugby campaign in 2016.

Connacht chief Ruane added that Keane had been appointed a “rigorous process” which included the new coach travelling to the west of Ireland to meet the club’s hierarchy in recent weeks.

“I was immediately taken by the genuine passion they have for the people they represent and the ambition they have to achieve so much more,” added the new coach.