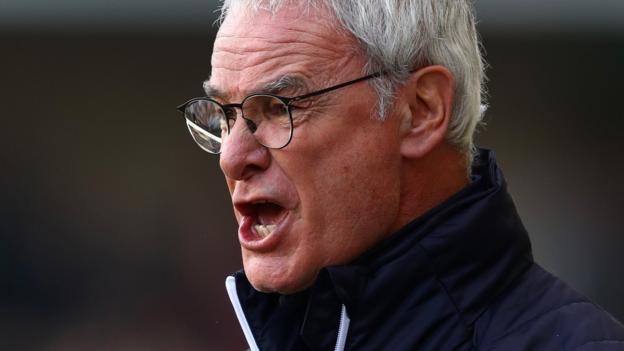 Last season’s Premier League champions are fighting relegation and were beaten in the FA Cup by League One side Millwall, who had a player sent off.

Leicester, with one win in eight games, face a Champions League last-16 first-leg trip to Sevilla on Wednesday.

“I want to speak again with the players and say we have to fight every match,” Ranieri said.

“I need the soldiers, I need the gladiators, because Millwall, with 10 players, showed they are fantastic gladiators.”

Millwall won with a last-minute goal from Shaun Cummings, despite playing for most of the second half with 10 men after Jake Cooper was dismissed.

With the visit to Sevilla and a Premier League home match against Liverpool to come, Leicester made 10 changes, but Ranieri still expected better from the players he selected at The Den.

“We could also lose but we would fight every match. I want to see this, the fight until the end.

“This defeat could be good for us because when you lose against a team who fights, you have to say well done to them but why did we lose?”

Leicester have not won an away match in the Premier League all season, and are just one point above the relegation zone.

They are in danger of becoming only the second defending English champions to be relegated, after Manchester City went down in 1938.

Former Wales striker John Hartson: “Leicester have been embarrassing, how far they have fallen this season is shocking.

“The manager is changing the team every other week. They are doing well in the Champions League, but in terms of fight and desire they are showing nothing.”

Ex-England winger Trevor Sinclair: “Leicester played quite well, were competitive and looked like they were going to score. Unfortunately for them, all the chances fell to Shinji Okazaki but he did not have his shooting boots on. Millwall goalkeeper Jordan Archer was outstanding all afternoon though.

“We all know the Leicester players can play, having won the Premier League last season. They now have to look at each other in the eyes and ask, ‘can we play under pressure in a dogfight?'”