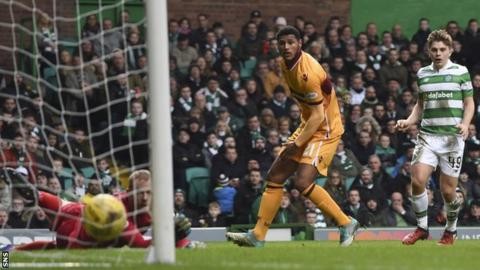 Celtic restored a 27-point advantage at the top of the Scottish Premiership with victory over Motherwell.

Substitute Zak Jules, who had replaced Stephen McManus early on, fouled Moussa Dembele and the Frenchman scored the resulting penalty.

Dembele and Scott Sinclair threatened with further efforts for the hosts in the second half as they moved to within five wins of the title.

Brendan Rodgers’ side could have their lead cut to 24 again when nearest challengers Aberdeen visit Kilmarnock on Sunday but, with a far superior goal difference, Celtic could effectively win the league and secure a sixth straight title with 15 more points after clinching a 20th straight Premiership win.

Motherwell’s last visit to Celtic Park saw them frustrate the champions for long spells of the first half and so it was again in the east end of Glasgow.

The visitors had to suffer early frustration of their own, though, losing two experienced defenders from their starting XI before the game really got going.

In response to their own adversity, the men in claret and amber packed their defence and Celtic struggled to create meaningful chances.

Manager Mark McGhee, sent to the stand during his side’s 7-2 thumping at the hands of Aberdeen on Wednesday, sat passively but pleased as his men held Rodgers’ side at bay.

Broken before the break

His head was in his hands just after the half-hour, though, when his side gifted Celtic the lead.

Jules needlessly brought down Dembele inside the box and the striker duly sent goalkeeper Craig Samson the wrong way from the spot. The familiar roar from the Celtic Park stands signalled the home side were on their way.

It was only going one way after that and Forrest doubled the lead when his dancing run on the right ended with him firing low inside Samson’s right-hand post. Celtic now looked in the mood.

Liam Henderson’s replacement Stuart Armstrong provided another boost for the league leaders by playing the whole of the second half after four games out.

Dembele and Sinclair both passed up good chances but the match settled into a bitty affair with Celtic dominating rather than demolishing Motherwell.

The visitors started to sneak forward as the game progressed knowing there was nothing to lose but Louis Moult and Scott McDonald were denied by a home defence keen to make it 12 clean sheets in 14 matches.

Celtic’s usual intensity was missing but they never looked like dropping points against a side who were up against it before a ball was even kicked.

“Moussa gets the penalty, uses his body really well, draws in the foul. The second one’s a great bit of play. I thought [Forrest] was outstanding. He gets a really good second goal.

“We were much better second half, used the sides better. [We] maybe could’ve scored two or three more goals.

“In the main, very pleased. Another clean sheet. Defensively we were strong. Another good victory.”

“Zak Jules has come up on loan from Reading and he made a mistake for the penalty but other than that I think he was excellent.

“James Forrest tore Joe [Chalmers] apart at the goal but James Forrest is unplayable for anyone in the country when he’s playing like that, so we can’t be too upset about that. He stuck to his task and overall I’m quite pleased with the young players.

“It’s not so much put to bed [the midweek 7-2 defeat at Aberdeen] as you never forget a result or performance like that. But what it does do is give you optimism and the belief that what we thought about them is true. For instance, the two Rangers games and the Hearts game that we ended up losing we could just as easily have won.

“The reality is we’d have rather not come here after that result [at Pittodrie] but we had to come here and we stood up to it, which I think is really important in the run-in.”