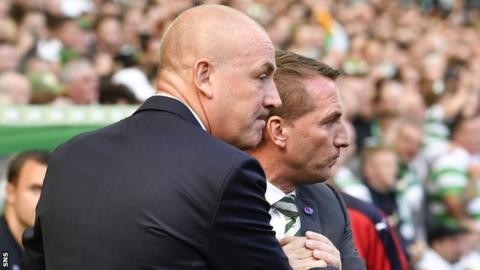 Rodgers believes it will only be a matter of time before the Englishman returns to management and praised Warburton’s work at Ibrox.

“It’s disappointing when any manager loses their job, especially when they lose it in the way that he did,” Rodgers said.

“Everybody was lauding the job he’d done here, in his first full season.”

Warburton was a youth coach at Watford when Rodgers was manager of the club and the pair have remained in contact since then.

‘I know his passion for Rangers’

Rodgers, whose Celtic team beat Warburton’s Rangers three times this season, sent him a message after his departure last Friday and plans to talk to him soon.

He believes that after a period of reflection, Warburton will be keen to return to management, and that his efforts during his first season at Ibrox should be recognised, when he guided Rangers to promotion to the Premiership.

“Mark’s job was to come in and restructure the club and the playing style,” Rodgers said.

“In the first year, I don’t think anyone would have argued with that. The step coming into the Premiership was always going to be difficult in that first season, no matter the budget, but everyone saw after the Celtic-Rangers [2016 Scottish Cup semi-final] at Hampden [which Rangers won on penalties] what a really good job he’d done.

“So I find it disappointing that after this period of time, he ends up losing his job. I know his passion for Rangers was making them the very best that the could be under the circumstances they were in.

“So I feel for him, [assistant] Davie Weir, who’s a good guy and a real Rangers legend, and along with [former head of recruitment] Frank McParland. They wanted what was best for Rangers. It’s sad to see them go.

‘Good job he did at Rangers’

“I’ve got no doubt that [Warburton] will get into management soon. It just depends on the timing and the circumstance.

“When I left my last job [Liverpool] in the October, I was pretty clear that I wasn’t going to look to get back into work until the following season. I needed a period of reflection to take that time and look back on my experiences at Liverpool and hope to be better in my next job.

“Mark might feel exactly the same. It’s come at a time in the season where you maybe just reflect now on the good job that he did at Rangers and look to get back in during the summer.”

Rodgers – who praised on-loan Ryan Christie for his goal for Aberdeen in their 7-2 defeat of Motherwell on Wednesday – insisted there are no lingering personal issues with Motherwell manager Mark McGhee, who takes his side to Celtic Park on Saturday.

McGhee and Celtic assistant Chris Davies did not shake hands following Celtic’s 4-3 win over Well at Fir Park in December. Before kick-off that day, McGhee had asked the Celtic players to warm up in a different area of the pitch and McGhee claimed never to have heard of Davies.

“I saw Mark last Friday, I went to our reserve game over at Dumbarton, and there’s no issue,” said Rodgers.

“Mark knows exactly who Chris Davies is, he’s a top-class young coach, him and John Kennedy are brilliant assistants for me here.”