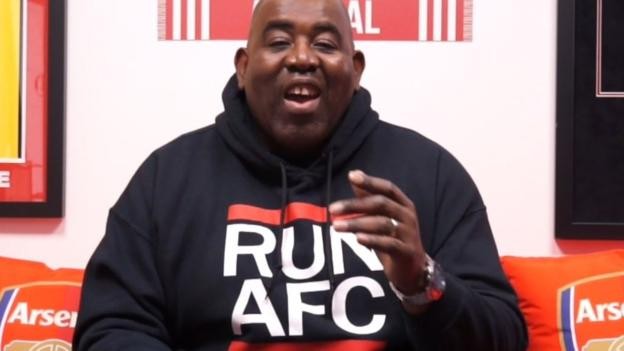 For each round of this season’s FA Cup, BBC Sport’s football expert Mark Lawrenson is pitting his predicting wits against a different celebrity guest.

This week, Robbie Lyle – the man behind the ever-entertaining ArsenalFanTV – is joined by Sammy, Jack and Ben from the Fulhamish podcast as Lawro’s opponents.

ArsenalFanTV have almost 350,000 subscribers on YouTube and their passionate, opinionated post-match interviews have attracted viewers far beyond the club’s fanbase.

Former Manchester United and England defender Gary Neville has agreed to appear on the channel after calling some of the opinions aired after the Gunners defeat to Chelsea earlier this month “embarrassing”.

Robbie has particularly fond memories of the 2014 final when Arsenal recovered from conceding two goals in the opening eight minutes to beat Hull 3-2 in extra time and win their first trophy in nine years.

“I looked over at Arsene Wenger and he looked a worried man, he could have been out of a job if we lost that final,” he told BBC Sport. “It was typical Arsenal, we did it the hard way, but we did it.”

Sammy, Jack and Ben chose a snowy night at Molineux for Fulham’s No Guts, No Glory moment, part of a BBC Sport campaign to capture drama from the competition’s illustrious past from every fan’s perspective.

* Away team to win at home in the replay

** Home team to win away in the replay

A correct result (picking a win, draw or defeat) is worth 10 points. The exact score earns 40 points.

Robbie and the Fulhamish boys need a big performance to claim top spot on the FA Cup leaderboard after BBC Radio 1Xtra DJ A Dot stormed in at number one with some precise predictions in round four.

All kick-offs 15:00 GMT unless otherwise stated.

I think that Lincoln, more than fellow National League side Sutton, are the real success story of the FA Cup so far. As well as beating Championship side Brighton at home in the last round, they went away and won at Ipswich in the third round.

Burnley away is probably one of the worst draws they can have though. Sean Dyche’s side are strong, physical and very well organised – there won’t be many in that team that roll over when they are on the wrong end of a heavy tackle.

Lincoln will have made lots of money, lots of friends and, having won all three games since beating Brighton, their run does not seem to have detracted from the rest of their season.

Robbie: Burnley are very, very strong at home, I think it is going to be the end of the road for Lincoln unfortunately. 2-0

Manchester City are playing Monaco in the Champions League last 16 on Tuesday, but Pep Guardiola has picked strong teams in the FA Cup so far this season.

Huddersfield are going great guns under manager David Wagner. They have won six straight games coming into this match which takes some doing in the dog-eat-dog Championship.

But City have hit a good run of form that has coincided with a 4-3-3 formation that they have hit on with Raheem Sterling, Leroy Sane and Gabriel Jesus up front.

Jesus is out, but they have Sergio Aguero – one of the best strikers in the country – to come in. That’s not bad.

Fulhamish: We beat Huddersfield 5-0 earlier this season, but they are going well in the league. With City possibly resting players ahead of the Champions League, you can imagine it will be a tight game, but perhaps not an upset. 1-2

This is an absolute free hit for Oxford. Middlesbrough don’t score many goals at home, so there is no need to park the bus. They should go and have a real go at Aitor Karanka’s lot.

I would love my old team to get through, but I fear this might be a hurdle too far.

League One Millwall have picked up two Premier League scalps already on their run, with Bournemouth and Watford falling by the wayside. They have not lost in 12 games.

But Leicester are in a serious mess if they can’t go away to Millwall and avoid defeat at the very least. It will be interesting to see which team Claudio Ranieri picks. That 2-0 defeat by Swansea at the weekend might have been the last straw for some. Maybe a change of personnel will provide the impetus they need.

Fulhamish: I can smell an upset here, big time. Millwall love the FA Cup, they beat Premier League Watford pretty comfortably in the last round and Leicester are not looking great. 2-0

I was at Wolves’ 2-1 win over Liverpool in the last round and they had a real go. Their left-sided attacker Helder Costa looked a real handful that day and two days later Wolves announced that they had bought him for £13m on a permanent deal. One way or another, I think he will end up in the Premier League soon.

Chelsea looked very good for the first 20 minutes of their draw against Burnley, but were pretty ordinary for the next 70. They didn’t get beaten though and that is why they are going to win the league.

They may not be involved in any other competitions, but manager Antonio Conte won’t want the bother of a replay.

Fulhamish: You couldn’t look further than Wolves on this one could you? Comfortable for the hosts. 3-0

Fulham are one of the most attractive teams to watch in the Championship. There is a lot of talk of 16-year-old left-back Ryan Sessegnon, who is an outstanding prospect, but Tom Cairney in midfield is a very good player. In Slavisa Jokanovic, the former Watford boss, they have a manager who really should still be in the Premier League as well.

We are not quite sure what sort of team Tottenham will put out. They included Harry Kane, Dele Alli and other first-choice players from the start against Gent in the Europa League on Thursday night which might be a factor.

I think Tottenham might struggle to get the job done at Craven Cottage, but I think they will come through a replay back at White Hart Lane.

Robbie: Come on Fulham! No, I’m trying not to be biased doing this, but this is a game where you could see a shock. Fulham are playing some decent stuff at home, Tottenham will probably rest a few players, you never know. 1-1.

Fulhamish: I think we can pull off an upset, but it is going to be a very, very close game. We are two clubs with strong footballing identities, who love to keep possession, and have great full-backs. 1-1

In terms of the depth of quality, Manchester United have as good a squad as any. Even if they make six or seven changes for this, they will field a team that would finish halfway up the Premier League.

Blackburn are down in the Championship relegation zone, but they have had plenty of bad luck with disallowed goals and sendings-off in recent weeks.

If there is going to be a big protest from the Blackburn fans against the Venky’s owners to coincide with United’s visit and the television cameras, that won’t help the players.

The Ewood Park pitch is a large one which is not good for the hosts.

On certain days against certain teams, Arsenal are mentally weak. That is not something that you can instil in people and without it there is only so far you can go. We saw that in that 5-1 defeat away to Bayern Munich in the Champions League on Wednesday night.

I’m a massive fan, but I think that Arsene Wenger will leave at the end of the season when his contract is up. I think it has come to a natural conclusion.

I think Arsenal will win against Sutton. It’ll be tough because Sutton are very good at playing on their artificial surface, but they can’t win an argument in the National League. Since beating Leeds in the fourth round, they have scored one goal and conceded 10 in four matches. It is understandable if they have switched off mentally.

Robbie: It’s the big one. You look at it and think it is going to be a standard win for Arsenal. But you know what we are like! I think the plastic pitch might be a bit of an advantage to Arsenal, suiting our passing game more than a mud bath. I can see us winning this, although we’ll probably pick up about three injuries on the way. 0-3

Last weekend, Lawro got six correct results, with three perfect scores, from the 10 games for a total of 150 points.

He beat hip-hop star Loyle Carner,who got five correct results, with one perfect score for a tally of 80 points.