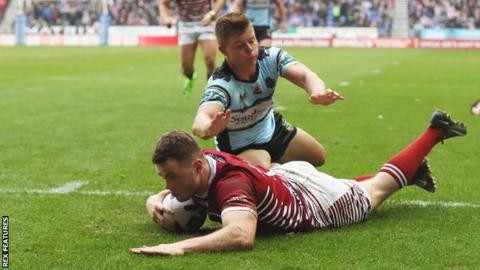 Oliver Gildart also crossed as an English club became world champions for the first time since Leeds in 2012.

Wigan’s success was aided by a superb defensive effort, with Cronulla’s only score coming from Jesse Ramien midway through the second period.

However, the Sharks had two marginal video referee decisions go against them when claiming tries of their own during the first half.

National Rugby League clubs had won all six matches since the inception of the expanded World Club Series in 2015, but Super League champions Wigan followed up Warrington’s victory over Brisbane Broncos to secure a first series win for the northern hemisphere’s domestic competition.

Wigan won three of the first five World Club Challenge contests but had not been victorious in the annual fixture since 1994.

Burgess, in his first home match since returning to the club following a year playing in Australia, enjoyed the perfect homecoming for the Cherry and Whites.

He is only the second player to score a hat-trick in a World Club Challenge, following Michael Jennings’ treble for Sydney Roosters against Wigan in 2014.

England winger Burgess, a scorer for the Warriors in that loss three years earlier, acrobatically touched down for their opening score and he grabbed his second at the end of a thrilling passage of play.

The home side survived two punishing sets of six tackles near their own try line, before going the length of the field to establish a 10-0 lead.

Sharks second-rower Luke Lewis had already seen his effort ruled out for offside and there was more disappointment for the reigning NRL champions as Kurt Capewell was deemed to have scraped the whitewash with the ball as he grounded it in the corner.

Gildart’s score, adding to his try in last season’s Grand Final victory over Warrington, gave Wigan some valuable breathing space but any hopes of becoming the third World Club Challenge winners to prevent their opponents from scoring were ended when Ramien touched down a grubber kick in the corner.

As well as Wigan’s defence performed, Cronulla – who do not begin their league season until the start of March – were guilty of several handling errors and the Warriors were able to see out time with little alarm.

And Burgess was able to produce a dream finale, getting a fingertip onto a low kick in the last minute to complete his hat-trick.

Wigan Warriors head coach Shaun Wane told BBC Radio 5 live sports extra: “It’s a fantastic feeling and I’m so pleased. The staff work hard but the players do their business out on the park.

“We did too much defending. I’m trying to stay positive and not think about how we played. I’m just glad to get the win.

“One thing we’re good at in this country is looking for negatives. Let’s be positive. Tony Smith did a great job with Warrington on Saturday and we won fair and square. Let’s give Super League a pat on the back.”

Cronulla head coach Shane Flanagan: “Wigan played really well and I thought it was a good game of footy. I wasn’t happy with the refereeing, but Wigan took their opportunities and good luck to them.

“It’s a great experience to come over here and play. The hospitality we’ve been shown has been fantastic and the game’s in good shape when we can get games like this on in a packed stadium.

“We’ve had a great time. A lot of our players have never been to the UK and they’ll be better players for it.”