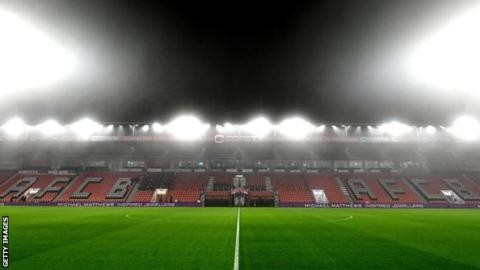 Bournemouth have been charged by the Football Association for failing to ensure anti-doping officials knew where players were for drugs testing.

Clubs are required to provide accurate details of training sessions and player whereabouts so that they are available for testing at all times.

The club has allegedly failed to ensure its information was accurate on three occasions, leading to the FA charge.

On Thursday, Manchester City were fined £35,000 for admitting a similar breach.

Bournemouth have until 23 February to respond to the charge.

The FA operates a “three strikes” policy in relation to breaches of ‘club whereabouts’ information.

It is a rather complex system which covers the first-team, under-23s and under-18s.

By 10:00 GMT on a Monday, clubs must have told the FA where their players are going to be for the remainder of that week. The information includes training times, days off, travel, home addresses and hotels.

Should the information – training times or days off for instance – change during the week, the FA has to be notified.

UK anti-doping officials are then entitled to turn up, at random, to carry out tests. If the player or players are not at the location they are supposed to be, this constitutes a breach.

The club are made aware of this and after three breaches, the FA will issue a charge.

Is the charge fair?

Former England international Gary Neville has expressed his dismay over the FA’s charges for clubs in relation to breaching anti-doping rules.

Neville’s then Manchester United and England team-mate Rio Ferdinand was banned for eight months for failing to take a drugs test, which resulted in the defender missing Euro 2004.

With Ferdinand’s hearing looming, England boss Sven-Goran Eriksson was told to leave him out of the squad for a match against Turkey in October 2003, prompting England players to vote unanimously to threaten to strike unless he was recalled.

The strike was eventually averted, but Neville remained critical of the FA and accused the organisation of “hanging [Ferdinand] out to dry” and prejudging the case.

On 19 December, Ferdinand was found guilty of the misconduct charge, banned for eight months and fined £50,000.