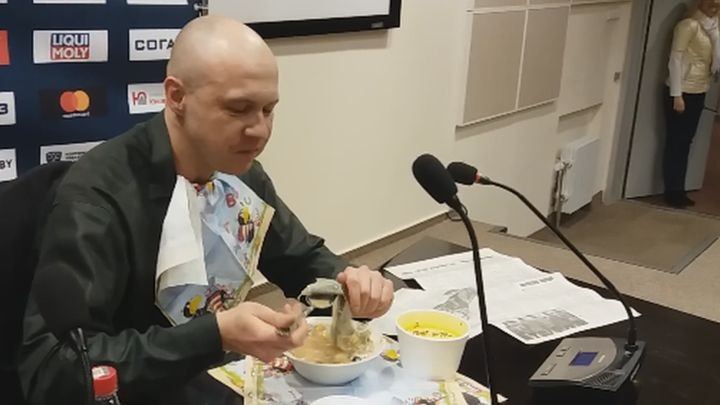 By News from Elsewhere… …as found by BBC Monitoring

A sports editor in Belarus has kept a promise to eat his own newspaper after incorrectly predicting the fortunes of a local ice hockey team.

Vyacheslav Fedorenkov, who writes for the major Belarusian sports paper Pressball, had said that Dinamo Minsk wouldn’t make it to the play-offs in the Kontinental Hockey League (KHL), an international league dominated by Russian teams. But the team proved him wrong, leaving Mr Fedorenkov to eat his words.

He arrived at Minsk Arena’s press centre with a copy of the paper, a bowl of soup to make it more palatable and a can of fizzy pop, the Naviny.by website reports. Unfortunately he was a bit short on soup, so only managed to eat half of the pages.

Mr Fedorenkov was in good spirits despite his unappetising meal, jokingly telling reporters: “I would do anything for my favourite team”. But he added that he would think twice before making any similar commitments in the future. “I will be frank with you lads,” he said. “Don’t joke like this and don’t make such promises, because they are pretty difficult to deliver.”

The was no pressure on the journalist from Dinamo Minsk, but team coach Craig Woodcroft was still impressed with the effort, telling Naviny.by: “I will remember his deed every time I enter this room.”

Use #NewsfromElsewhere to stay up-to-date with our reports via Twitter.