Balotelli sent off for third time this season 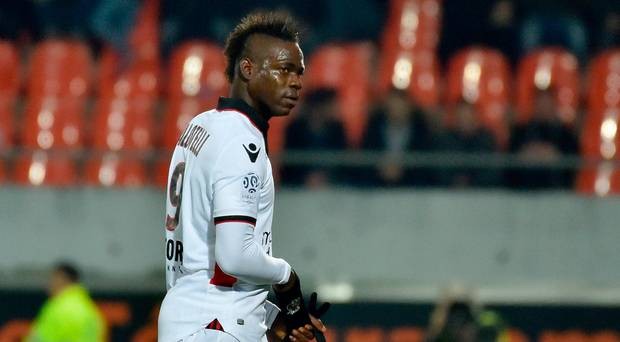 Mario Balotelli was sent off for the third time this season – but Nice still won 1-0 at bottom club Lorient to close in on Ligue 1 leaders Monaco.

The former Liverpool striker was dismissed for dissent in the 68th minute after tangling with Zargo Toure.

Wylan Cyprien’s shot had given the visitors a 15th-minute lead, and earned them a first away win since November.

Nice move up to second, three points behind Monaco, who drew 1-1 at Bastia on Friday.

Lucien Favre’s side have climbed above Paris St-Germain, who will regain second place if they avoid defeat at home to Toulouse on Sunday.

Balotelli, who has scored 11 goals for Nice since arriving from Liverpool last summer, was dismissed for two yellow cards in the reverse fixture against Lorient in October.

He also received a straight red card in the goalless draw at Bordeaux in December.

Clinton N’Jie and Florian Thauvin scored as Marseille, in sixth, beat Rennes 2-0 to move level on points with fifth-placed Saint-Etienne.

Cameroon forward N’Jie, on loan from Tottenham, marked his first game since returning from the Africa Cup of Nations by sweeping in the opener from the edge of the penalty area.

Then midfielder Thauvin, in his second season on loan from Newcastle, floated in a second from 25 yards after being set up by a clever backheel by Morgan Sanson.