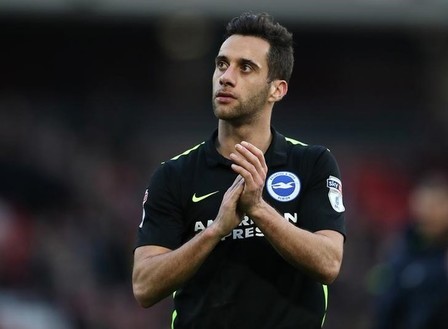 Brighton returned to the top of the Championship as Sam Baldock’s two goals gave them victory at Barnsley in Chris Hughton’s 100th league game in charge.

Barnsley had strong penalty appeals waved away in the first half when Lewis Dunk appeared to handle the ball.

Hughton called for Albion to maintain their composure after just three wins in seven games and got a fine response from his side, who moved above Newcastle and seven points clear of Huddersfield in third.

The 58-year-old, who has won exactly half of his 100 league matches since taking over in December 2014, now faces tricky back-to-back home tests against fourth-placed Reading and Newcastle.

It was a clinical performance from Brighton and Baldock but they also had goalkeeper David Stockdale to thank for their 16th clean sheet of the campaign.

His brilliant one-handed save kept Watkins’ low strike out midway through the first half before blocking the winger’s close-range effort to keep the score at 2-0.

“I thought it was an even game throughout but they were clinical at one end and gave us nothing at the other end.

“First half we did great, but didn’t score when we were on top. As well as we may have been playing, they still limited us to very few chances. They’re comfortable without the ball as well as with it.”

“I thought the front two were excellent, they worked really hard. I just thought it was a really good, all-round team performance.

“I think for us that have been in the game a long time, we know that things can be so different come the next game. We don’t get much time to enjoy it, we’re back in on Monday, but it’s a really pleasing result.”