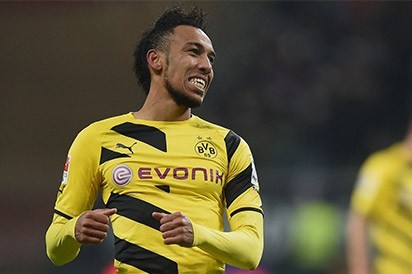 Borussia Dortmund’s Thomas Tuchel has blamed Gabon striker Pierre-Emerick Aubameyang’s Champions League shocker against Benfica on a loss of fitness at the Africa Cup of Nations.

Tuchel hauled off Aubameyang moments after the 27-year-old missed a penalty in the 1-0 last 16 first leg defeat in Lisbon.

It was one of four clear chances spurned by Aubameyang, the Bundesliga’s top scorer with 17 goals.

“‘Auba’ has been physically behind since returning from the Africa Cup,” explained Tuchel.

“After the missed penalty, I didn’t get the feeling anymore from his body language that he was in a position to score.

“He is a part of the team and I can’t imagine that he had a problem with my decision.”

Having been on fire up to the winter break, the striker has struggled in recent weeks since Gabon’s group stage exit last month at the Cup of Nations.

Aubameyang, who has made no secret of his desire to one day play for Real Madrid, was last month told by Dortmund bosses to stop talking about leaving after two interviews where he hinted at a June exit.

Despite losing in Portugal, Dortmund battered the Benfica goal with 14 shots compared to the hosts’ five.

Aubameyang twice fired over the bar with only Ederson to beat, hit his penalty straight at the goalkeeper and also failed to convert a cross from Raphael Guerreiro from two yards out with the goal gaping.

Benfica’s Greek striker Kostas Mitroglou scored the only goal of the game but Tuchel remains positive about the return leg on March 8.

“We didn’t pay attention for three minutes, when we went off the boil, and we conceded with their only shot on goal in the second half.

“That’s football, when you play so well, yet still walk off as losers.

“But for days like that there is always the return leg. Shit happens.”