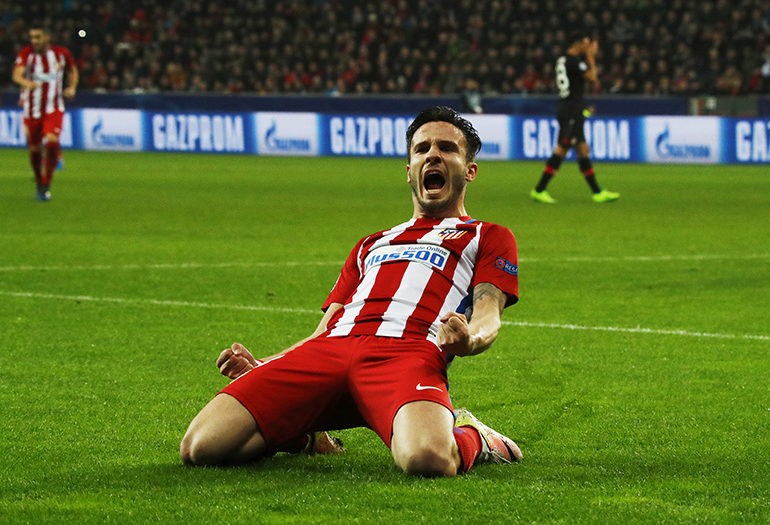 Saul Niguez gave the visitors the lead with a stunning strike, picking the ball up on the right before cutting inside and curling a left-footed shot into the top corner.

Wendell struck his own crossbar in clearing Felipe Luis’ cross and home goalkeeper Bernd Leno twice saved well from Griezmann as Leverkusen were fortunate to go in at the break just two goals behind.

Karim Bellarabi pulled one back for Leverkusen early in the second half by finishing off a slick team move, but Gameiro’s penalty restored Atletico’s two-goal advantage before Stefan Savic’s own goal reduced arrears once again.

Substitute Fernando Torres further strengthened Atletico’s grip on the tie when he nodded in a late fourth.

The return leg takes place at the Vicente Calderon on Wednesday, 15 March.

Another quarter-final for Atletico?

Diego Simeone’s Atletico have real Champions League pedigree, finishing as runners-up both last season and in 2014, and reaching the quarter-finals in between.

The La Liga side dominated the first half at the BayArena and would have been out of sight but for Leno’s crucial saves from Griezmann.

On both occasions Leverkusen were totally exposed at the back, but the France international’s low strikes were kept out by the legs of the German.

Despite the misses, Griezmann did manage to get on the scoresheet, as did former Liverpool and Chelsea striker Torres, who came off the bench to notch his 41st goal in European competitions.

Much to learn for Leverkusen

Leverkusen finished third in the Bundesliga last season but are struggling this term, 20 points behind leaders Bayern Munich.

They did, however, emerge through the Champions League group stages unbeaten.

Manager Roger Schmidt fielded 17-year-old midfielder Kai Havertz for his first Champions League start, making him the first player born after the 1999 final to start in the competition.

Despite three assists in his last five games, Havertz struggled to make an impression but 20-year-old team-mate Julian Brandt did show his promise with some impressive runs.

Slovenia international Kevin Kampl came close to netting for the hosts in the opening period, but his curled effort was kept out well by Miguel Angel Moya.

Bellarabi’s first-time finish early in the second half from Benjamin Henrich’s cutback gave the 2002 runners-up hope, while their second goal arrived when Moya spilled a cross onto team-mate Savic’s leg and into his own net.

On another night two goals and 62% possession could have seen Leverkusen emerge with the win, but some self-destructive defending ultimately cost them dear.

‘We showed passion and fight’

Atletico Madrid boss Diego Simeone: “We could even have won by a higher margin but their goalkeeper pulled off two outstanding saves to deny Griezmann. It is important to have belief when you play away from home, and I thought we had that in abundance.

“We thought before the game that, if we attacked down our left side, we would cause their right-footed defenders problems.

“That is exactly what we did. Leverkusen fought their way back into the game in the second half but overall it is a very satisfying evening for us.”

Bayer Leverkusen boss Roger Schmidt: “It is easy to see how Atletico have reached two finals in three years. We knew of their counter-attacking abilities before the game but we ended up shipping two goals in the first half.

“We showed passion and readiness to fight. We had a very good 15 minutes towards the end, where the whole stadium got behind us.”

Both sides are back in league action at the weekend. Leverkusen host Mainz in the Bundesliga on Saturday (kick-off 14:30 GMT), while Atletico face a huge trip to Barcelona on Sunday (kick-off 15:15 GMT).