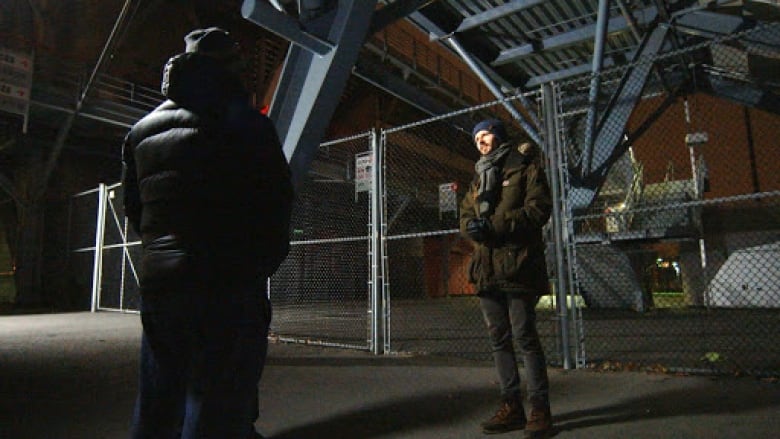 This story is based on an investigation by Romain Schué for Radio-Canada’s program Enquête.

Thousands of dollars in fees but no invoices. Charges for services that are otherwise free. Cases dropped without warning.

As Montreal social worker Anne-Marie Bellemare started meeting more and more asylum-seeking clients from northern India about 18 months ago, she began to notice a worrying pattern. She likens it to extortion and says she believes it’s happening both in their home country and in Canada.

Bellemare, who works in the city’s Parc-Extension neighbourhood, says she kept hearing a familiar story: people who were promised a quick path to residency in Canada, only to be left facing years-long waits after being relieved of their life savings.

Often, she said, they were advised by handlers in India to leave a child behind because of visa issues and told they would soon be reunited. Then they were left without news.

Bellemare and other health workers in the city say they believe there’s a network of immigration fraud encouraging people in India to pay large sums for documents that will get them to Canada, then thousands more in fees once they arrive.

Bellemare said she’s seen her fair share of shoddy immigration consulting. But the sudden increase in people from Punjab who seemed to be falling victim to it, and the similarity of their stories, was alarming, she said.

One man, a farmer in his thirties from Jalandhar who spoke to Radio-Canada’s Enquête investigative program, said he sold all his land in order to pay a handler there the equivalent of $20,000 to buy his way to Canada and claim asylum.

“They dangle dreams at you,” said the man, whose identity Radio-Canada agreed not to reveal because he fears reprisals.

He came to Canada in 2019 with his wife and young son, paying cash for temporary visitor visas and plane tickets. Once at Montreal’s Trudeau airport, the family claimed asylum. He told Radio-Canada their lives were in danger back in India but didn’t elaborate.

‘I didn’t know anything about Canada’

“They told us Canada would be better for us. That it would be easier to get a visa for Canada,” the farmer said. “But I didn’t know anything about Canada.”

What happens once asylum seekers arrive is of particular concern to Bellemare and a number of other health-care practitioners across Montreal, and makes them wonder how willing the Canadian government is to protect new arrivals from becoming prey for fraudsters.

“I would like … to be assured that people coming here are getting the correct information and are not being misled or told lies by people who allow them to come to Canada, usually by having them pay large amounts of money,” said Dr. Juan Carlos Chirgwin, a family doctor at the Parc-Extension CLSC clinic.

In 2018, Chirgwin set up a screening clinic for asylum seekers to help identify and treat common and sometimes chronic health issues they struggle to get care for elsewhere.

He says several recounted having to pay thousands in consulting fees in Montreal, often for services such as applying for a work permit, which multiple organizations in Montreal offer at no cost.

They are also often unaware that they have a right to free legal aid and don’t know about PRAIDA, a government-funded organization made up of nurses and social workers that helps asylum seekers settle in Quebec, he said.

“Many of them will arrive at the airport in Dorval and a person will then bring them to Parc-Extension, without visiting the PRAIDA offices,” Chirgwin said.

“A lot of these services are provided for free by PRAIDA, but in the community, some of the asylum seekers are having to pay high fees for this and that is illegal. Unfortunately, it’s something that’s happening.”

Chirgwin described migrants telling him about how they were convinced by people calling themselves immigration consultants to pay exorbitant fees for help getting their claims processed, another free service PRAIDA helps with.

In a statement to Radio-Canada, Federal Immigration Minister Marco Mendicino said someone “who demands payment to bring [people] to Canada or allow them to stay in Canada is committing fraud.”

A source in the Canada Border Services Agency, who spoke on condition of anonymity because they were not authorized to speak publicly, confirmed to Radio-Canada the agency is aware of the potentially fraudulent practices and that investigations are underway.

The source said the CBSA had identified a kind of “modus operandi” that involved Indians paying tens of thousands of dollars for “packages” including plane tickets and tourist visas that would allow them to cross the Atlantic.

An agency spokesperson said they could not reveal whether investigations are indeed afoot because they are only made public if criminal charges are laid.

The CBSA source says the agency has catalogued a number of similar and recurring stories from asylum seekers, including being chased from a village because of accidentally killing a cow, or facing threats from political parties or organized crime.

“Some of these stories seem to be copied from one asylum seeker to another. In some cases, there will be several contradictions that make the court doubt the veracity of the facts they allege,” said Stéphane Handfield, a Montreal-based immigration lawyer.

According to data analyzed by Enquête, asylum claims from Indians have a high rejection rate: an average of 61 per cent were not accepted between 2017 and 2020, nearly double the overall average of 34 per cent.

Bellemare and Chirgwin say the process of coming here on the basis of unrealistic promises and being encouraged to leave children behind can cause serious trauma, which can be even more challenging for someone with limited resources.

“We see families, parents that are going through depression for a year or two. It’s a long depression. They even have suicidal thoughts,” Bellemare said.

Chirgwin says in addition to serious health issues, many of the asylum seekers he sees from India are grappling with psychological stressors and past trauma.

“Even if they are economic migrants,” he said, “the person might be 65 years old, only speaks Punjabi, speaks no English, no French, and they used to be a very hard-working farmer in northern India. They probably had land, and my guess is they sold all their assets.”

Many expect to gain residency and reunification with any family members left behind within a year or so, Chirgwin said.

It generally takes at least two years to get a first asylum hearing with Canada’s Immigration and Refugee Board. If the initial claim is rejected, it can take several more years to wind through the appeal process.

The federal Immigration Department told Radio-Canada it has attempted to set the record straight in India, advertising in local newspapers that applying for a visa should only cost about $100 and warning against anyone trying to charge extra fees.

The department hopes those efforts will help stem the spike in asylum seekers coming from India.

While there were 325 asylum claims from people born in India in 2016, that number rose to nearly 5,000 in 2019 for Quebec. India has now become the No. 1 country of origin for asylum seekers arriving in the province, far ahead of Mexico, Nigeria, Colombia, Haiti or Congo.

Chirgwin says he believes the services available to asylum seekers in Montreal are fair and adequate but that officials could do a better job of letting people know about them.

Bellemare agrees and would like to see more shady immigration consultants held accountable for their actions.

“I would like Western countries to take their responsibility, because most of the big mess that is happening is because of colonization, so we have to open our borders and welcome [people] well,” Bellemare said.

“I think we should be much more organized, not just for getting people here for the jobs we don’t want to do.”

The Punjabi farmer said he ended up paying an extra $5,000 in consulting fees for him and his family after their arrival in Montreal.

He says he’s still thankful they made it here. The question now is whether they’ll be able to stay.