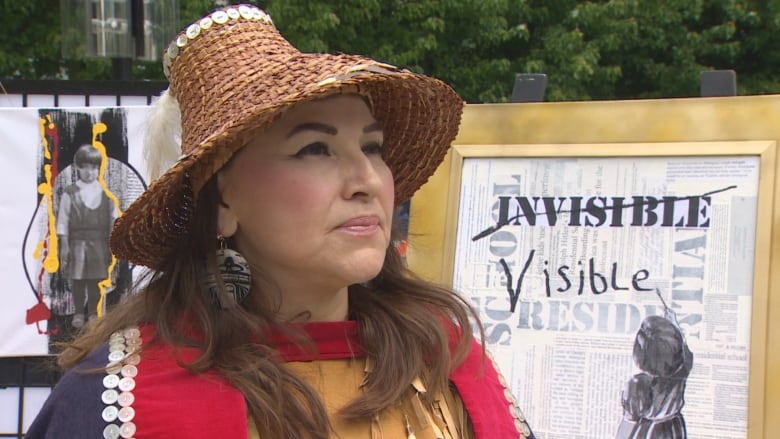 Dozens of people marked the anniversary of the display of shoes on the steps of the Vancouver Art Gallery Saturday, placed there after suspected unmarked graves were discovered on the grounds of a former residential school in Kamloops last year.

On Saturday, Haida artist Tamara Bell, along with others, held a ceremony to reflect on the year that has passed since she arranged 215 pairs of shoes on the steps of the art gallery, a former provincial courthouse.

She placed the shoes to represent the more than 200 children whose unmarked graves were believed to have been discovered with ground-penetrating radar earlier in May 2021 by the Tk̓emlúps te Secwépemc First Nation at the former Kamloops Indian Residential School site.

“A reminder of the number of children who have been discovered at sites across the country at residential schools,” said Bell. “We have to get to the truth before we can get to reconciliation and without truth, reconciliation is impossible.”

After Bell installed the 215 shoes on May 28, 2021, many people in the city gathered at the site to reflect on the discovery and added other shoes, stuffed animals, toys and artwork as a way to cope with the discovery in Kamloops.

The National Centre for Truth and Reconciliation (NCTR) has said about 4,100 children died at residential schools in Canada, but that the actual total is much higher.

A large number of Indigenous children who were forcibly sent to residential schools never returned home.

The discovery in Kamloops in May 2021 began a national reckoning over Canada’s past and its treatment of Indigenous people. Many other nations have since made additional discoveries of suspected unmarked graves across the country.

Other memorials, similar to the one in Vancouver, were set up in other cities across Canada.

On Monday, a large ceremony marking the anniversary of the discovery in Kamloops was held by the Tk̓emlúps te Secwépemc First Nation, which was attended by Prime Minister Justin Trudeau and Governor General of Canada Mary Simon.

“People don’t really understand or grasp the significance of the trauma over 500 years that Indigenous people have suffered through,” said Bell on Saturday on the steps of the Vancouver Art Gallery.

She hopes the memorial will help encourage the change needed from Canadians to recognize the country’s colonial past and achieve reconciliation as set out by the NCTR.

William Nahanee, a residential school survivor, was at the art gallery on Saturday.

“We have a better opportunity, I believe as a survivor, that First Nations people, given the proper opportunity, can become a proper part of this growing Canadian society that we all want,” he said.

The Kamloops Indian Residential School ran from 1890 to 1969, when the federal government took over administration from the Catholic Church to operate it as a residence for a day school, until it closed in 1978.

As many as 500 children from First Nations communities across B.C. and beyond would have been registered at the school at any given time, according to the NCTR.