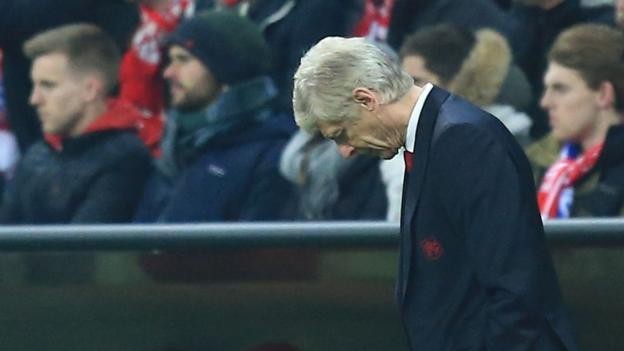 The Gunners suffered a 5-1 defeat at the Allianz Arena, which included four second-half goals after they lost defender Laurent Koscielny to injury.

It leaves them facing elimination in the first knockout round for a seventh successive season.

“Just before half-time we had two good chances to score. We came back and played well.

“In the second half we lost Koscielny very quickly – he came off at 1-1 – and finally we collapsed. Bayern are a better team than us as well.

“I felt the third goal was a killer for our players because after that we had no response.”

Arjen Robben fired Bayern into the lead, but Arsenal fought back and equalised when Alexis Sanchez followed up and finished his own saved penalty.

However, in the second half the Gunners capitulated, as Bayern excelled in a 10-minute period during which Robert Lewandowski restored Bayern’s lead before Thiago Alcantara scored twice.

The Frenchman fielded only three questions in his official post-match interview, which lasted less than three minutes.

3+ – The number of goals conceded by Arsenal in four of their last six first-leg matches in the last 16 of the Champions League.

4 – This is the first time that Arsenal have conceded four goals in a single half since against Chelsea in March 2014.

5 – This is the most goals that Arsenal have conceded in a first leg of Champions League knockout match.

25.8 – The percentage of possession Arsenal had during Wednesday’s first leg at the Allianz Arena.

‘We played really well but it is not the final’

Bayern Munich boss Carlo Ancelotti has been under a little pressure despite his side sitting seven points clear at the top of the Bundesliga.

But the former Chelsea and Real Madrid boss refused to say the tie was over before the return leg at Emirates Stadium on 7 March.

“The performance was good,” said the Italian, who has won the Champions League three times as a manager.

“We played really well, but it’s not the final. We need to play the second game unfortunately.

“The result is really important, but we don’t want to make a mistake. We have an advantage but we have to prepare for the next game in London.

“We want to play like we did tonight – same intensity, same spirit, same concentration. We want to avoid problems.”