Arsene Wenger: Arsenal boss says he will manage next season 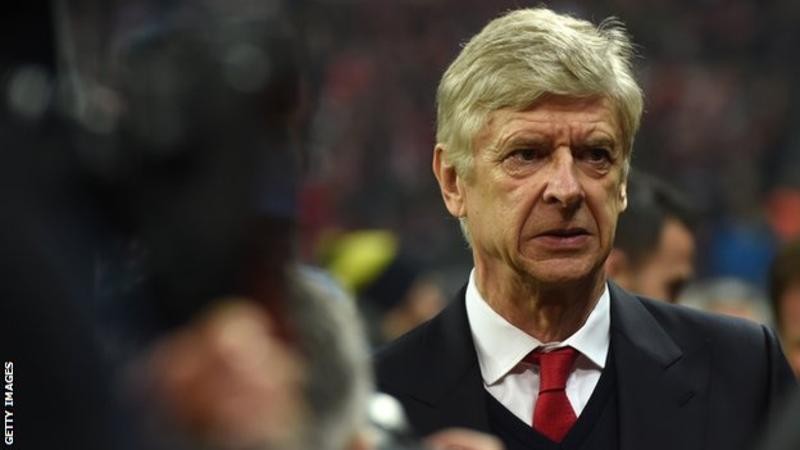 Arsene Wenger says he will definitely be managing next season, whether at Arsenal “or somewhere else”.

Wenger, 67, was speaking at the end of one of the most turbulent weeks of his two-decade tenure as Gunners boss.

After Wednesday’s 5-1 Champions League defeat by Bayern Munich, several ex-players said they believed his time in charge was coming to an end.

The Frenchman’s contract expires at the end of this season and he said he would decide on a new deal in March or April.

“No matter what happens I will manage for another season. Whether it’s here or somewhere else, that is for sure,” Wenger said on Friday.

“If I said March or April it is because I didn’t know. I do not want to come back on that.

“I am used to the criticism. I think in life it’s important to do what you think is right and all the rest is judgement. I am in a public job and I have to accept that, but I have to behave with my values.”

Wenger, who has been in charge of Arsenal since 1996, said: “We let everyone judge and criticise, we have to deal with that. We have to bounce back, that is what life is about.

“Even if I go, Arsenal will not win every single game in the future. It is not like before I arrived Arsenal had won five times in the European Cup.

“What is important is that the club makes the right decision for the future. I care about this club and its future and it is very important the club is in safe hands.

“The main emotion is everyone has a big disappointment. We have to regroup and refocus on the next game, and to take care of the consequences a disappointing result can have on everyone’s spirit.

“We have to focus on the real problems and they are the way we play football, not my future.

“It is always important not to look for wrong excuses in life.”

However, he has consistently qualified for the lucrative Champions League and the club has continued to grow financially, despite the pressures of building a new stadium.

The Gunners reached the knockout stage of Europe’s elite club competition for a 14th year in a row this season, but the last-16 first-leg thrashing at German champions Bayern leaves them with little hope of progressing.

The performance, coupled with earlier damaging league defeats by Chelsea and Watford, prompted several former Arsenal players – some of whom played under Wenger – to suggest his time was up.

Former Gunners captain Martin Keown described the defeat as Wenger’s “lowest point”, while ex-defender Lee Dixon said: “This team is getting no response from him. I’ve never seen him like that.”

In the Premier League, they are 10 points adrift of leaders Chelsea. After the Blues beat them 3-1 on 4 February, ex-England defender Danny Mills said Arsenal “have settled for fourth again”.

Earlier, former striker Ian Wright, who scored 185 goals for the club between 1991 and 1998, said he believed Wenger’s time as Arsenal boss was “coming to the end”, although the Frenchman later denied giving any indication of his future plans.

Meanwhile, Wenger also said defender and captain Laurent Koscielny will have a scan on the injury he suffered against Bayern.

The France international was replaced by Gabriel after limping off just after half-time, and within seven minutes Arsenal conceded twice to go 3-1 down.

The Gunners travel to National League Sutton United in the FA Cup fifth round on Monday (19:55 GMT kick-off). The match is live on BBC One.